Naturally, the University of Santo Tomas star got a little ribbing from no less than the coach of the same school that beat the Tigers for this year’s UAAP men’s basketball title.

“May konting biruan, tuksuhan,” said Nash Racela, the man responsible for steering the Far Eastern University Tamaraws to the UAAP championship at the Tigers' expense.

Racela and Ferrer, along with team manager Butch Antonio, shared some light moments at the sideline during a short break in the Gilas practice.

Asked what he told the 6-foot-4 Ferrer, the Gilas deputy coach didn’t hesitate to tell his side of the story.

“Niloko ko siya kanina, kasi nga di ba we were together sa SEA Games,” said Racela, who also acted as Baldwin’s assistant coach with the Gilas cadets team that won the basketball gold in the biennial meet held in Singapore.

“Sabi ko pinag-aralan ko yung tendencies niya and it helped me in the (UAAP) Finals,” he added with a naughty smile.

On second thoughts, it could be true all along, Racela was asked again.

“Pwede,” he said as he burst into laughter. “Ganun talaga, e.” 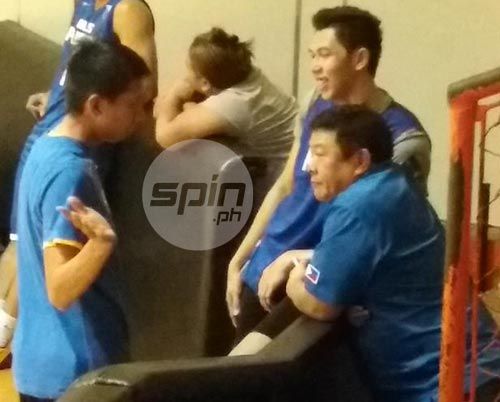 Ferrer was hardly a factor in the Tigers’ 67-62 loss to the Tamaraws in the deciding game of the best-of-three title series early this month after he finished with only six points and attempted just seven times when UST’s season was obviously on the line.

The meltdown came just after Ferrer exploded for 29 points in a Game Two win by the Tigers that forced the winner take all.

Racela refused to dwell on the touchy issue, but stressed he’s glad seeing the lanky UST forward back and playing again for the national team.