ALVIN Pasaol's pre-game routine is no different from most players, except for a carbo-loading feast that includes the mandatory extra cup of rice.

Rice, you guessed it, is also a must in Pasaol's post-game recovery meal.

Extra rice and baby fat are a given when it comes to Pasaol, but the celebrated University of the East star has a similarly huge appetite when it comes to basketball, both for practices and games.

The Davao native pushes himself to the limit in practice to be fit enough for the system of UE coach Derrick Pumaren, who loves to put defensive pressure on opponents for an entire game.

Pasaol has turned heads in his two seasons in the UAAP thanks to his unique skills set, and a lot of basketball fans expect to see him flourish in the PBA when the time comes.

Not a few people also want to see him trim down the baby fat - the better for Pasaol, they say, to stand out in the PBA.

Pasaol, though, would have none of it.

The 6-foot-2 forward said he is very comfortable playing in his 'ideal weight' of 200 lbs., insisting he didn't feel right when he tried to get his weight down.

It's hard to disagree with Pasaol when you see how well he has played in his, uh, 'ideal playing weight.'

The Warriors star recently torched defending champion La Salle for 49 points - the highest in a league game since Jeff Napa, now the coach of Letran, scored 43 for National University in 2002.

As if to prove that was no fluke, Pasaol followed that with a 32-point performance in a win over University of Santo Tomas - the Warriors' first this season.

No wonder Pumaren, who has handled some of the best players in the country in a coaching career spanning three decades, isn't too bothered by the excess weight his star player is carrying.

“Okay lang sa akin 'yun,” Pumaren, who owns championships in the PBA and UAAP, responded when asked by SPIN.ph if he is bothered by Pasaol’s extra pounds. 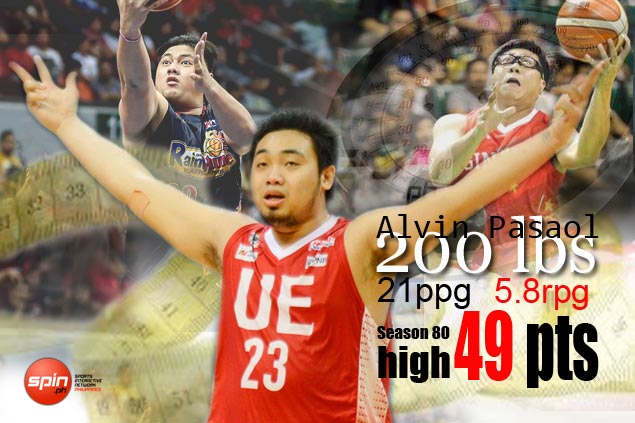 Pumaren insisted Pasaol is agile and skilled enough to play well despite the excess pounds he carries, comparing his player to similar heavy hitters like Beau Belga and Noli Locsin.

The veteran coach qualified Pasaol is closer to Locsin than he is to Belga.

“Beau Belga, yes something like that, they can both shoot outside but (Pasaol is) lighter. I think that is his fighting weight. He’s been playing with that weight. He’s like a Noli Locsin,” Pumaren said.

“He can carry his weight. He’s quick on the ball and on the rebounds. It is not a disadvantage for him, 'yung weight niya, it’s an advantage for him kasi sanay siya maglaro ng ganun.

Pasaol, who is averaging 21 points (second best in the league), 5.8 rebounds and 1.4 steals a game this season, said the extra poundage comes in handy at UE, where he is asked to sometimes play the 4 position in the absence of a foreign player.

So you still expect Pasaol to trim down anytime soon?