WHEN Spin.ph ran a story about the last time University of Santo Tomas and Far Eastern University met in a UAAP Finals back in 1979, it led us to one member of that Glowing Goldies team - thanks to his daughter who took interest in the photo of a newspaper account of the game that we used for the article.

She soon led us to her dad Edmund Yee, who, along with Felix Natividad, gallantly held the fort for UST in that title game in the absence of flu-stricken Glowing Goldies star Ed Cordero.

Yee, 59, is now a successful businessman who owns a number of Ford dealerships in Metro Manila. He is also an avid golfer, and was in fact competing in the 66th Fil-Am Golf Invitational Team Championship in Baguio City when Spin.ph caught up with him.

Yee had a good run during his brief basketball career, having also played for the Philippine Youth team under longtime FEU coach Turo Valenzona and later for the fabled Crispa team in the defunct Manila Industrial Commercial Athletic Association (Micaa) amateur league.

But his basketball career ended early, when frustration over the folding up of the Micaa and the death of his father led him to a new career path.

Still, Yee said he never regretted hanging up his sneakers at the prime of his career to tend to the family business, in the process missing out on a pro career in the PBA.

“No regrets whatsoever,” he said firmly.

But the competitor that he is, Yee said what eats him up to this day was the Glowing Goldies' failure to win that 1979 championship in his final season with the school.

[See Take Me Back Tuesday: Let's look back at time UST, FEU last met in finals 36 years ago]

Yee, in fact, still remembers details of that game as if it happened only a day ago, and considers UST's loss to an FEU side coached by Valenzona and led by Arturo 'Bai' Cristobal, Joel Valle, Gimo Valerio and American Anthony Williams as one of his biggest disappointments.

Yee said the halftime score, 51-27, belied the competitiveness of the game. Despite Cordero's absence, UST put up a good fight until the athletic Williams took over and led the Tamaraws to the 100-89 win at the Loyola Center, which has since been renamed Blue Eagle Gym. 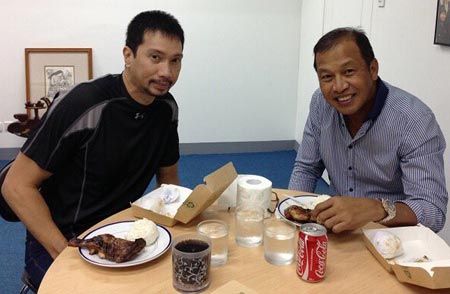 That finals loss, Yee recalled, tainted what had been a good run for the Glowing Goldies under the stewardship of Roger Serafico, who battled University of the East’s Baby Dalupan in the 1967 finals that ended with the two teams being declared co-champions, and returned to lead the team again in 1979.

Yee said UST had beaten a UE side that had former Ginebra star Rudy Distrito, current Warriors coach Derrick Pumaren, and the late Rhoel Nadurata in a playoff for a finals berth.

“(Serafico) was a colorful coach at that time. Kinuha uli siya ng mga pari to coach us. Kaya that’s the only time he coached us after so long. Malakas kami with Ed Cordero around. He is really a scoring forward. There was a game na tinalo din namin ang FEU sa eliminations,” said Yee.

That the Goldies failed to do so remains a source of frustration for Yee - and he is not about to let good pal Cordero forget it so easily.