Jeron Teng has acted like a model pro since college, says Ben Mbala

JERON Teng is the ultimate leader.

As meek as the third-year Alaska slasher is, his teammates could attest to his impeccable leadership skills.

Ben Mbala sure did.

"The thing with Jeron is he was like the boss. I felt like, as one of the leaders and the superstar of the team, Jeron had to show by example," the Cameroonian forward said in The Prospects Pod.

"He was a leader, he did his part, he did his job. I’m not going to lie, I’m would say that as a college basketball player, he was already acting as a professional."

Mbala said that Teng's work ethic is what sets him apart from his other teammates, and it certainly rubbed off on the rest of the team in their time in La Salle.

It was evident to Mbala from the moment he arrived in Taft from Southwestern University.

"In the beginning, I was in Team B and I was only practicing against them and do the opposite of the team plays or help them. But as soon as I started practicing with the team, I got to know the guy and he was just a leader. And he started like coming on to me, talking to me. He would come in before practice, does not leave without doing something like extra shots," he said.

"When you look at guys like that, you’re going to be reminded that in the UAAP, everyone wants to be the best and you cannot just be out there and sleep. In my mind, if Jeron’s working like this or Kiefer (Ravena) is going to the US and train, you cannot just be out there and like, 'Okay, I’m in La Salle, that’s enough for me. I’m just going to get my degree and go.' And I was just thankful to be able to compete with a guy like that." 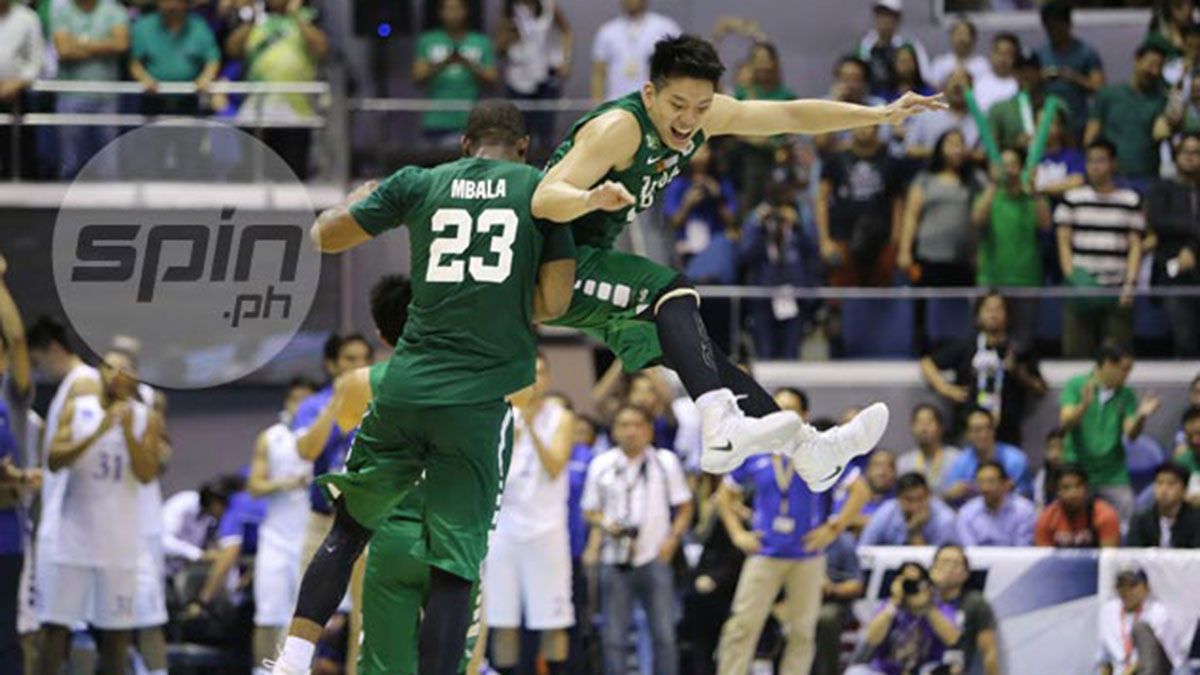 To Mbala, seeing a star have that kind of dedication truly pushed him to better himself.

And it did, as seen in him winning two UAAP MVPs in his time with the Green Archers.

"Honestly, I was looking up to him because I’ve seen what he was able to do in the UAAP and I’ve heard about his work ethic. And just seeing guys like that reminds me that, 'Man, you can’t be out here and just be average.' You got to do it a different way, or better. Playing alongside him, you know if they will double team me, I know Jeron’s gonna be open and I know Jeron’s going to make the right pass," he said. "He was just that guy that I was looking up to because he’s a hardworking guy and I kind of took that from him as well."

Together, the partnership of Teng and Mbala delivered La Salle the UAAP Season 79 crown in 2016, giving the former a proper send-off to his colorful collegiate career.

Even though the two went on their separate ways, Mbala said that the influence Teng had in their time together is still evident as he traverses the globe as a pro: knowing that nothing comes easy and if you want to be great, you really have to work hard for it.

"Things are not supposed to be always easy. I’m not going to lie that everywhere, it was just smooth," said the 6-foot-8 high-flyer, who has played in Mexico, Korea, and France.

"In Mexico, I got in a league where people think about the stats, everybody’s taking shots and not passing the ball. And as a rookie, you know you cannot just go in there and do whatever you want, you got to follow the rules or the top players of the team. Then I went to France, I was able to dominate in the second division. I went to Korea and things didn’t go my way and I went back to France."

Mbala, who now plays for CSP Limoges, continued: "But having this habit of wanting to do more and more like what Jeron is doing and all the guys I played with, it just helped me to get like a stepping stone of having to begin somewhere and not take it as a bad experience but as a learning experience. I’ll just keep working, work for next year, next season or the next game. That's what I kept in mind: if things don’t go your way, take a little break and look at the situation, think about what’s going on and why it’s not working and try to fix and keep moving forward. That’s what I’m trying to do and I always be doing that."