A POLICE team arrived at the Araneta Coliseum on Wednesday looking for one of the players of the Ateneo basketball team, shortly after the Blue Eagles' victory over the University of the Philippines in the UAAP men's basketball tournament.

Several policemen both in uniform and civilian clothes lingered outside the Blue Eagles' dugout after the game but Ateneo athletic director Em Fernandez declined to divulge full details on why authorities were there or who they want to talk to, saying only that it is a 'personal matter' involving one of their players.

Fernandez and other team officials led by coach Bo Perasol and team manager Epok Quimpo stayed in the dugout for about two hours while policemen waited outside.

Fernandez also declined to the reveal the name of the player involved but Ateneo’s Cameroonian player Chibueze Ikeh was noticeably the only Blue Eagle left in the dugout at the time of the commotion.

Asked if Ikeh was being sought by police, Fernandez said: “It’s regarding one of our students. That’s it. That’s the only thing we could say.”

Ikeh later left the venue in an unmarked van accompanied by some policemen in civilian clothes. Sources said he was brought to a police precinct but Fernandez refused to confirm it.

“It’s a private car but I think (it's) one of the coaches,” he said. Asked where it was headed, Fernandez said, “I don’t know yet. I have to find out.”

Sources said the case involved a woman and had nothing to do with game-fixing.

Asked to confirm, Fernandez said, "It's a private matter."

The incident is the second off-court issue to hound the Blue Eagles, coming just two weeks after back-up forward John Apacible came under fire for going on a drunken rampage following a traffic altercation.

Apacible has since been suspended for the rest of the UAAP eliminations. 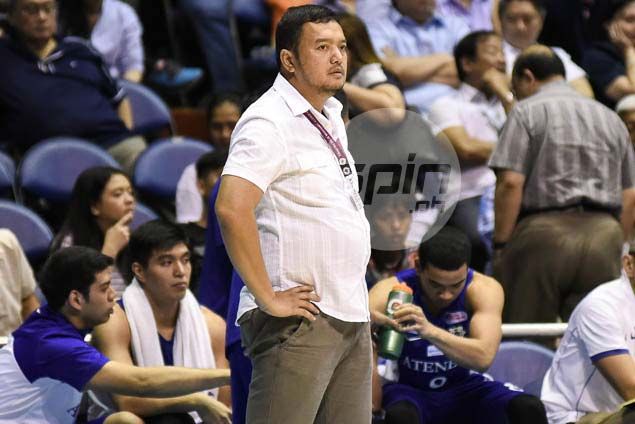