Ateneo junior stars Mendoza, Mamuyac too distraught to think about future after season ends at hands of La Salle

JOLO Mendoza and Gian Mamuyac were so distraught to even think about the future after the Ateneo Blue Eaglets' campaign in the UAAP Season 78 juniors basketball tournament ended at the hands of rival La Salle-Zobel at the stepladder stage on Monday.

Mendoza and Mamuyac were two of 11 players who ended their high school careers on a wrong note after the Blue Eaglets suffered a 68-75 loss to De La Salle-Zobel, ending their hopes of a title repeat.

The defeat was doubly painful for Mamuyac, who was left to watch the final minutes of his last juniors game from the bench after picking up five fouls.

Mendoza emerged as one of the top stars during the Blue Eaglets' run to last year's title at the expense of National University. He finished with a 16.6-point average this season.

But he understandably disappointed with an injury-plagued final season that saw him injure his ankle in a game against NU in the first round.

“This season was one of the worst seasons individually and for the team. This is not what I expected to play the whole season. I never got my feel for the game, tapos na-injured pa ako,” said Mendoza.

Mendoza said he felt bad for his fellow graduating players, most especially those who have no plans to pursue a career in basketball after high school. 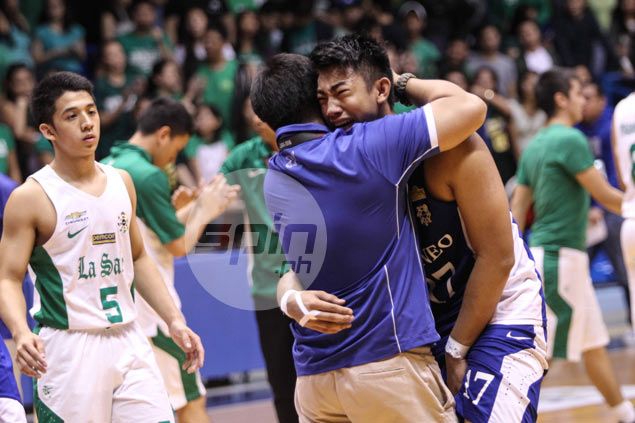 For his part, Mamuyac, who became a member of the Batang Gilas national squad last year, said future plans are farthest from his mind right now.

Still, he found solace in the spirited stand the Blue Eaglets put up against the Junior Archers.