THIRDY Ravena has had a penchant for stepping up his game when the spotlight is at its brightest.

It's no different this time out, embodying Ateneo's unabashed hunger after a 16-day layoff as he emphatically exhibited that desire to break out of the cage to remind everyone how and why, in the first place, it got to this position to complete only the seventh perfect season in the UAAP.

Ravena was once again on another sphere, leading the Blue Eagles to a dominating 91-77 victory over University of Santo Tomas in Game One of the UAAP Season 82 men's basketball Finals on Saturday.

When everyone was still about to take off, the 6-foot-2 winger was already soaring, rising to the situation anew missing only four of his 18 shots en route to a season-high 32 points, five rebounds, and three assists, putting up a show in front of the 19,176 in attendance at Smart Araneta Coliseum.

With that flight, Ateneo is just one win away from the first 16-0 drive in league history and a coveted three-peat which would cement its place among the legendary teams of the past.

More impressive was Ravena keying Ateneo's stronger retort after the lead trickled down to as low as three, 41-38, with 2:43 left in the second period, triggering the 13-1 first half finisher to take the 54-39 halftime lead, before helping that swell to 23 numerous times in the succeeding frames.

Only a sprained right ankle at the 3:36 mark of the fourth quarter slowed down Ravena's rampage, but at that point, the result was already beyond doubt.

Performances like what Ravena had could only rubbed off to his peers, which shot 52-percent from the field with Ange Kouame posting 18 points, 12 rebounds, and five assists, and SJ Belangel shooting 4-of-8 from deep to rack 12 points, five dimes, four boards, and two steals. 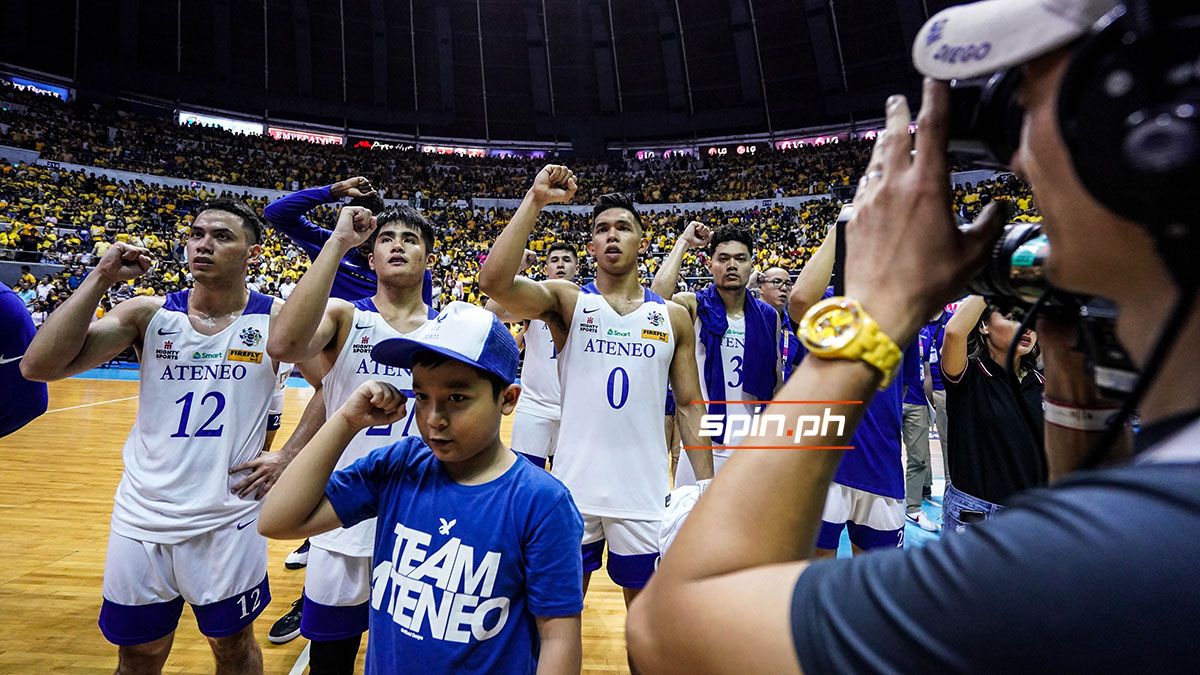 The Blue Eagles can snag their 11th UAAP title with another victory on Wednesday, still at the Big Dome.

"It’s good to get the win, obviously. But we tend to not really see that as a win, but we see that as a first half of basketball and we just get a long halftime break before Game Two," said coach Tab Baldwin as his eyes is still geared towards finishing the job off after his side shot a mercurial 52-percent from the field.

Rookie of the Year Mark Nonoy willed UST with a career-high 26 points on a 7-of-14 shooting from threes, but couldn't get the breaks against the powerhouse Ateneo side.

MVP Soulemane Chabi Yo also had a silent 13-point, 10-rebound outing, while Brent Paraiso had 14 points built on four treys.