ATENEO’s Big Three of Greg Slaughter, Kiefer Ravena and Nico Salva provided the muscle, firepower and poise as the Blue Eagles beat La Salle, 71-61, on Saturday in the arch-rivals' first meeting this season in the UAAP men’s basketball tournament.

Slaughter was an unstoppable presence inside the paint while Ravena and Salva made their presence felt at the right moments for the Eagles, who withstood a spirited La Salle stand before a sea of blue- and green-clad supporters at the MOA Arena.

The seven-foot Slaughter scored a team-high 20 points and, more importantly, gave up the ball each time La Salle double-teamed him at the post, allowing Ravena and Salva to put the finishing touches to the Eagles' second straight win and third in four games overall. 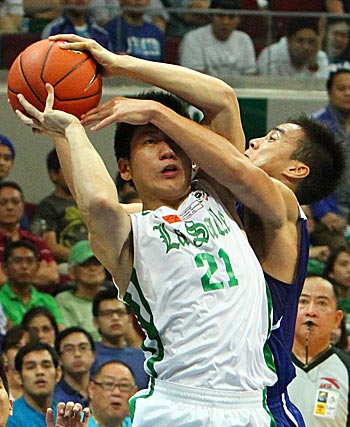 “(La Salle) mixed it out a lot and threw Greg off,” said Ateneo coach Norman Black. “They doubled him with another big man but Greg did a good job of passing the ball.”

“Eventually, we kept pounding it inside and La Salle’s bigs got into foul trouble and it was Greg’s willingness to give up the ball that really helped us,” Black added.

Ravena scored half of his 16 points in the first quarter, which saw Ateneo open a 20-8 lead entering the second canto. Salva added 16 points, the bulk of it coming in the second half to help the Eagles stave off La Salle’s rally in the final stretch.

But the win did not come easy.

Led by indomitable guard LA Revilla, the Archers grabbed a 45-44 lead in the third quarter. A three-point play by big man Norbert Torres made it a 50-49 game but Ravena finished the third quarter with three straight points to make it 53-50 in Ateneo's favor entering the fourth.

“We had a quick lead and they came back which is what I expected. There is so much school pride in this game so I expected every game to be close,” Black said.

La Salle slumped to its second consecutive defeat to fall to 2-2 win-loss overall.