ALDIN Ayo is hoping a Sorsogon police report clearing him of any wrongdoing in University of Santo Tomas' controversial Bicol bubble will help him convince the UAAP Board of Trustees (BOT) to overturn his indefinite ban.

"I feel vindicated by the result of the Sorsogon City PNP investigation on the alleged IATF violations in our activity in Capuy, Sorsogon; which result, was duly confirmed by the Office of the Governor of the Province of Sorsogon," he said in a statement on Friday.

The Sorsogon police and the provincial government of Sorsogon, through Governor Chiz Escudero, said an investigation found Ayo didn't violate any pandemic health protocol when he brought his UST team to his hometown for a 'farm training program.'

Ayo resigned as UST coach and was later suspended indefinitely by the UAAP based on the findings of an independent investigation conducted by the school. He hopes the PNP report will help convince the league to overturn the ban.

'It is a big boost to my appeal for reconsideration of the UAAP indefinite ban imposed upon me," said Ayo.

The controversial coach said matters which the Sorsoson PNP took into account in their investigation were "overlooked" by the school's fact-finding committee that became the basis for his suspension.

"I have dutifully raised matters overlooked by the UST fact-finding committee in their findings which became the basis for the UAAP decision. These pertinent matters, if properly considered, may significantly alter the decision of the UAAP Board."

"The result of the investigation conducted by the proper government authorities, the PNP on the ground — at my house and farm, will certainly complement my position on the matter: that I have not in any way violated any national and local government health
protocol or IATF regulations."

The Sorsogon PNP investigation, which was later certified by Governor Chiz Escudero, said Ayo conducted a "special personal development farm training" for his players in his mahogany farm and piggery and not team practices that were prohibited during the COVID-19 pandemic.

The players "were allowed to make use of a basketball court which is enclosed inside the living room of [Ayo's] house where the players had individual training and not team practice" while waiting for harvest, the report added.

Ayo also hit out on his critics who refuse to believe his story, saying, "It is understandable that many people will find it hard to believe that basketball players can also be engaged in farm work and training, and planting trees. But if it is the truth, then it is. For truth is stranger than fiction."

There, he issued a challenge: "Come to my house and farm in Capuy, Sorsogon, and see for yourself. 'For the harvest is plenty and the laborers are few," he ended. 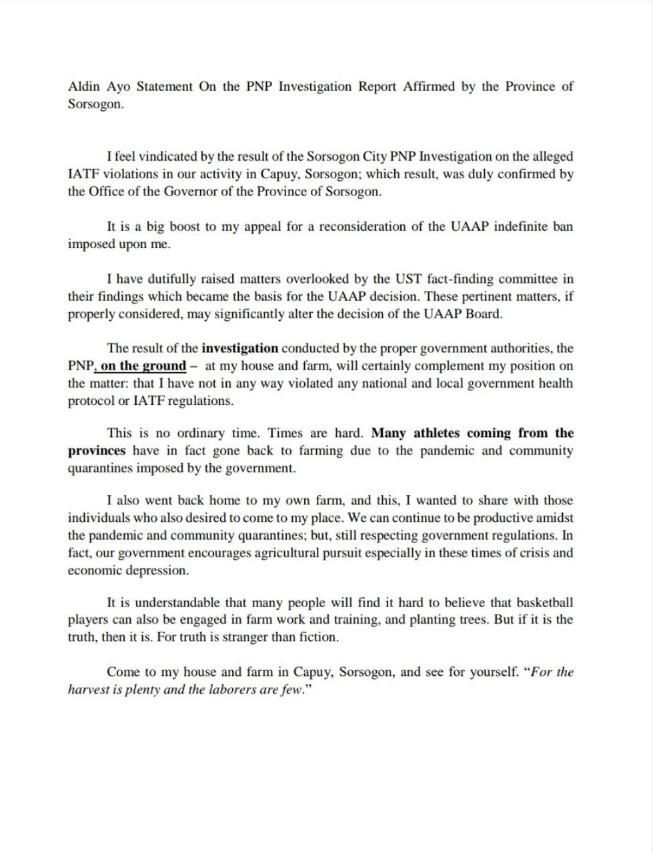