Thanks to sound development program, 6-9 teen Kai Sotto starting to spread his wings

AT 6-foot-9, Kai Sotto inevitably turns heads the moment he steps on the floor.

Now his game is attracting attention as well.

A sound development program designed for the 14-year-old prodigy is starting to show results, based on the recent performances of Sotto for the Ateneo Blue Eaglets in his rookie season in the UAAP juniors basketball tournament.

Last January 24, the gangling teenager had 12 points and nine rebounds in Ateneo's victory over University of the East. Four days later he again came close to a double double with his nine points, 13 rebounds, and three shotblocks in another win over De La Salle-Zobel.

Not bad for a kid who just getting his feet wet in organized basketball.

“He has improved his conditioning and strength,” said Ateneo juniors coach Joe Silva when asked about the progress of Sotto. “’Yun talaga ‘yung concern namin sa kanya dahil 14 years old lang siya. But he has improved on that.”

Silva said the improvement in Sotto's play became evident in the second round of the UAAP eliminations, when he started to attend practices regularly after he was excused from missing a few training sessions during the first round to focus on academics. 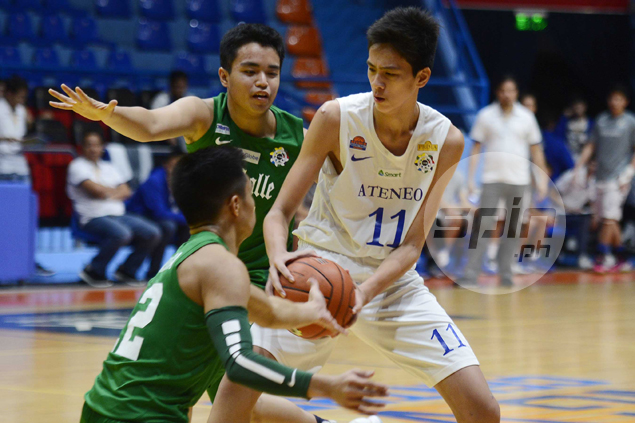 The Blue Eaglets’ 69-53 over the Junior Archers enabled the squad to clinch the fourth and final spot in the semifinal round, joining Adamson, National University, and Far Eastern University-Diliman. That means a taste of playoff basketball for Sotto.

To improve Sotto's strength, Silva said Sotto has been working with a personal trainer at Ateneo’s Moro Lorenzo gym so he can deal with the level of physicality in the high school game.

Silva is pleased to see the results starting to show for Sotto, who is noticeably stronger and more agile that he was when before he joined the program.

“We’ve got him a personalized trainer to really work on his upper body strength and core strength. Kasi dahil bata pa siya, natutulak pa siya. Right now, you can see that he is more agile, he can run up and down the court more.

“He is finally getting the hang of playing at a high level at his age,” said Silva.

The program designed by Ateneo for Sotto runs parallel with the plans of the Samahang Basketbol ng Pilipinas (SBP) and its juniors development program for the player, according to Batang Gilas team manager Andrew Teh.

Teh said they plan to name both Sotto and another teen prodigy, Ethan Kirkness, to the Batang Gilas team for the Seaba Under-16 tournament which the Philippines either in April or May, primarily to give them the exposure at that level at a very young age.

The Batang Gilas team manager said he is also in talks with Ateneo team manager Epok Quimpo so Sotto can tag along when the school's senior team hold its annual training in the US.

"We know that developing these players is a process, but as early as now we want to expose them to a high level of competition," Teh told SPIN.ph. "Of course, we don't expect them to stand out, but importante ang exposure. It will play a big part in their development."

Silva said he's all for Sotto seeing action for Batang Gilas, so long as the kid does well enough in school not to be required to take summer classes.

“Siguro naman, you know already that I lend my players sa Batang Gilas. All he has to do is huwag siya mag-summer classes and I will allow him to play, because he will be exposed to a higher level of basketball. It will motivate him to be even better,” said the youthful mentor. 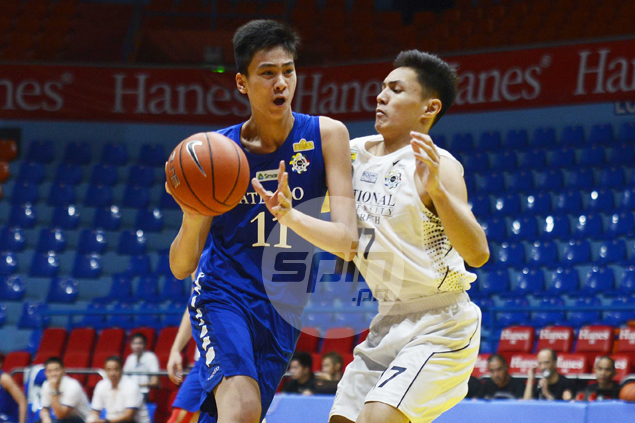 The Ateneo coach is careful not to raise expectations, but agreed that the improvements seen in Sotto's game are quite encouraging.

And more than the kid's size, Silva at this point is more impressed with Sotto's basketball IQ.

“You have to realize that when he came here, hindi siya masyadong familiar sa organized basketball. He is getting there already. His learning curve is very high compared sa dati na hirap siya," said Silva.

"That is why he has been playing well not just because he is tall but also because he reads situations well and he knows how to position himself,” said Silva.