The war down South

CEBU CITY–The best collegiate basketball in this side of the country is once again on display as the 12th season of the Cebu Schools Athletic Foundation Inc. (Cesafi) kicked off over the weekend at the Cebu Coliseum.

The Cesafi is the same league that produced the likes of current UAAP star Greg Slaughter, the seven-footer who prior to donning Ateneo’s blue and white had led the University of the Visayas Green Lancers to three titles while capturing two MVP trophies along the way.

Another product of the league is projected PBA top rookie pick June Mar Fajardo, who hails from the municipality of Pinamungahan. The 6-foot-10 center, a two-time league MVP like Slaughter, anchored a University of Cebu Webmasters team ended the Green Lancers’ stranglehold on the league by winning successive championships.

The list, which also includes FEU starting forward Roger Ray Pogoy, rookie guards Mark Jayven Tallo of La Salle and Henry Asilum of UP and Rain or Shine forward JR Quinahan, has solidified Cebu’s status as the basketball hotbed of the South while establishing the Cesafi as arguably the best collegiate league outside of Manila.

Looking to further cement that reputation are these players to watch out for in this coming season: 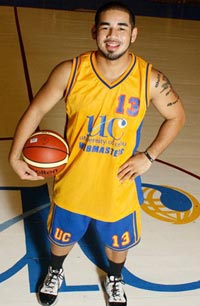 With the loss of Fajardo and three-point-shooting power forward, Edward Pao, the task of carrying the defending champions’ hopes lies squarely on the broad shoulders of stocky guard Brian Heruela. The 6-foot Fil-Am guard has long been one of the premier guards in the Cesafi, typified by his back-to-back selections to the Mythical Five. On the national scale, he has also proven his worth in the PCCL where he nearly averaged in triple-double numbers in leading the Webmasters to a fourth-place finish against the likes of powerhouse squads San Sebastian, Ateneo and San Beda.

The Cobras fell short in their magical run to the finals last year, where they were derailed by the Fajardo-led Webmasters. However, SWU is back with even more venom this season as they parade newly-acquired wingman Ben Mbala. The 6-foot-7 Cameroonian boasts of an impressive resume as he was the 2011 Basketball Without Borders Africa Camp MVP. The soft-spoken African has shown the ability to dominate on both ends of the floor, with his tenacious work on the boards as well as deft touch from both inside and out. The Mapua Cardinals and the San Beda Red Lions got a taste of the King Cobra’s power in games that they played here in Cebu during the offseason.

It’s now the sweet-shooting Michael Cantonao’s time to shine. After spending years playing in the shadows of talented wingmen Giovanni Padillo and Sam Hermosa, Cantonao will now anchor a revamped squad under Julian Macoy, who replaced longtime mentor, Mike Reyes (brother of Chot Reyes) in the offseason. It remains to be seen, however, if the 5-foot-11 two-guard can do it consistently as he will now be looked upon to deliver the goods especially with a team loaded with neophytes. 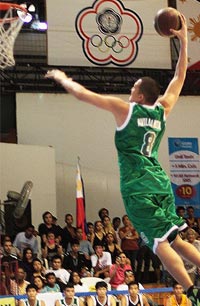 University of the Visayas Green Lancers

For nine years (2000-2009), the University of the Visayas Green Lancers were the benchmark in the Cesafi, until Fajardo and the rest of the UC Webmasters broke through for titles in the last two seasons. This year, the Lancers are bent on reclaiming the throne with a talented team coached by Felix “The Cat” Belano. It boasts of former University of the East reserve Eman Calo, crafty guard John Abad and veteran wingman, Phil Mercader. UV also brings in a lot of ceiling as they have six players standing at 6-foot-5 or taller, led by 6-8 African player Steve Akomo. But the players to really look out for are power forward Hernan “Wowie” Escosio and last year’s slam-dunk king, center Andrew Avillanoza, as the two are slated to play for the Cagayan Rising Suns in the upcoming PBA D-League season.

Since finishing second to the Slaughter-led UV Green Lancers in 2009, the USJ-R Jaguars continue to look for answers. This season might give them one in pogo-stick forward Abulaiz Sulaiman. The former varsity volleyball player has supplemented his leaping ability with a mean perimeter game which has, more often than not, left defenders dazed and confused. Still, the Jaguars need more from their backcourt which is being led by former UE recruit James Regalado and reigning three-point king, Banjo Capilar.

Another squad that has nowhere to go but up. The Panthers are expected to be led by talented wingman James Ferraren and undersized power forward Fritz Dajalos. Ferraren is a slasher of a two-guard who deftly finishes at the rim with his patented floater. Dajalos on the other hand, is a lefty forward with a feathery touch around the rim. 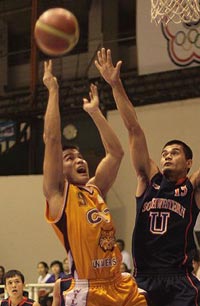 The CIT-U Wildcats are poised for a breakout season especially with the confidence and the momentum gained in the Cesafi preseason tournament, where they finished in second place behind the UV Green Lancers. At the helm of the Wildcats’ run towards respectability are Christian Taboada, a fiery wingman with a multifaceted game who regularly burned the opposing team’s defenses to the tune of 20-points per game during the preseason.