TAB Baldwin and Rob Beveridge will be the main speakers in the Go for Gold-NBTC National Coaches Convention to be held from March 22 to 24 at the Mall of Asia Arena.

Around 2,000 coaches from all over the country are expected to attend the convention which will coincide with the NBTC National Finals.

NBTC program director Eric Altamirano said Baldwin, who is currently the head coach of the Ateneo Blue Eagles, will discuss coaching under pressure, while Beveridge, former coach of the Australian national team, will be talking about the fundamental of coaching.

“Our theme is coaching the next generation. We are really focusing on the grassroots. We really wanted to focus on the fundamentals of coaching,” said Altamirano in a press conference on Monday at the Buffalo Wild Wings in Pasig City.

Usually held in October, Altamirano said the NBTC decided to hold it in March so that coaches also get to watch the NBTC national finals featuring some of the best high school teams in the country.

“It’s really something to look forward to especially sa mga pupunta na mga coaches. They will not only experience attending the national coaches convention, but they will also get to watch the national finals. Two birds in one stone,” said Altamirano.

“The coaches convention, to me, is my single most favorite basketball event of the entire season,” said Compton. “This year, we will be in MOA and it will be coinciding with the national finals. You’ll see a thousand coaches, they are getting better. Just do the math and multiply the kids that they are going to impact.”

Go for Gold will be supporting the convention for the first time. It has previously supported other sports such as triathlon, cycling, skateboarding and sepak takraw.

“This is a program that we really believe in and something that we want to support, which is grassroots development. Without the coaches to guide our young athletes, they would not get to where they are. This is really a program worth investing and developing,” said Go for Gold godfather Jeremy Go.

Gatorade is also supporting the NBTC. 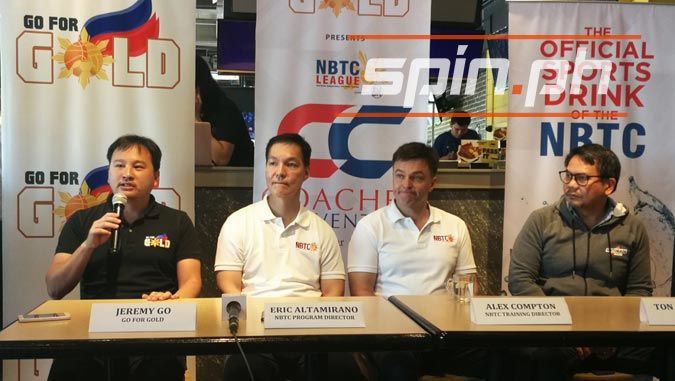