How mad was Yeng Guiao after Rain or Shine's Game One meltdown? Players describe dugout scene

AFTER Rain or Shine blew a 24-point lead and allowed San Miguel Beer to steal a 101-95 win in the opener of their PBA Governors Cup semifinal playoff, the scene inside the Painters' dugout was definitely not for the faint of heart.

Yeng Guiao, a veteran coach known for his short fuse as much for his unconventional ways and patterns, admitted to Spin.ph he gave his players a tongue lashing but insisted it was nothing out of the ordinary.

His players begged to disagree.

One player who spoke on condition that he not be named revealed how Guiao spent the first 15 minutes of their post-game meeting shouting at the top of his voice, even threatening to trade some of its players.

Spin.ph even observed a pattern in the exit of the players from the locker room, with the seldomly used players coming out first, a good thirty minutes after the game, and the subject of Guiao's scorn emerging last.

Ryan Arana, JR Quinahan, Jonathan Uyloan and Jericho Cruz bore the brunt of Guiao’s ‘homily’ owing to their failure to defend well the shooters of San Miguel like Marcio Lassiter and, later on in the game, Alex Cabagnot.

Asked to describe how a ‘mad Yeng Guiao’ faces the team after a loss, especially after a particularly frustrating defeat like this one against the Beermen, assistant coach Caloy Garcia gave a more detailed description.

“Galit siya, just the usual coach Yeng Guiao. He wants to win and he is a winner, you have to give him that.” 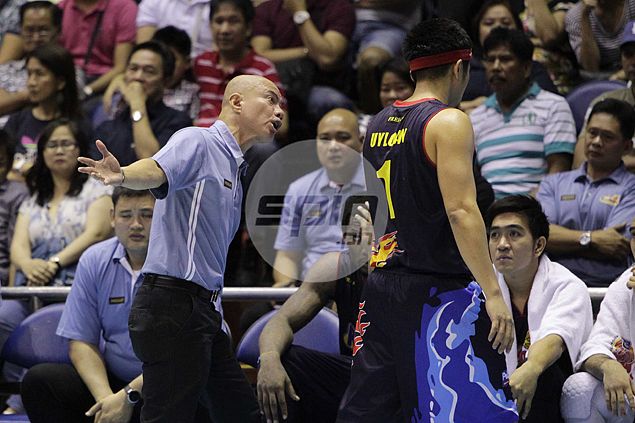 Guiao later broke down some of the team’s lapses, something that he wants the coaching staff to review in their practice on Friday afternoon ahead of Game Two of the best-of-five series.

“When we got zoned, we weren’t able to break down the zone!”

[See Jervy Cruz didn't know what was more terrifying: breaking a toe or breaking the bad news to Guiao]

Rain or Shine forward Beau Belga bared the players accept the tongue-lashing from Guiao with a grain of salt.

See video of interview with Guiao and his team: