IT took a bush league game in Marikina to remind us how good Willie Miller was - and how good he still is.

Left unsigned by all the PBA teams at the start of the season, the two-time pro league MVP took his act to the DeLeague in Marikina where, on Wednesday night, he hit one of the most memorable buzzer-beating three-point shots - regardless in what league.

The 36-year-old pride of Olongapo City led Siargao's fightback from a 10-point deficit in the final quarter and saved his best for last, rescuing the team owned by Nestor Luego from losing twice-to-beat edge in the final after Hobe Bihon hit a three-pointer with 3.8 seconds left, 71-74.

That, it turned out, only set the stage for Miller Time.

Reacting quickly after a three-point try by teammate Dodie Sta. Cruz was deflected, the former Letran star picked up the loose ball then beat the buzzer with a three-pointer that sent the game into overtime.

See the amazing play on VIDEO:

Siargao went on to win the game, 85-79, and the championship in the league organized by Marikina Mayor Del De Guzman, but the game will be remembered for Miller's late heroics which, his fans say, only show that 'The Thriller' still has what it takes to play in the PBA.

Here's the shot from another angle:

A lot of fans who first saw this video from Instagram agreed that he should be given a chance to write the final chapter of his colorful career in the PBA.

Miller, however, said he is starting to lose hope on a comeback especially after a traumatic experience where he was dropped from the roster by Barako Bull Energy, just days before the current conference started.

Turning serious, Miller claimed that he has never stopped keeping himself in top shape, in case a call comes.

And does he think he still deserves a spot in the PBA?.

But when shown about the positive comments from fans on the video posted by Spin.ph, Miller seemed to have been touched.

But for Miller's 10-year old son Dre, his dad still is one of the best guards in the country today.

"He's still way up there. And my dad is not yet old," said the the younger Miller, who himself is now a star player of his school Collegio De San Agustin in Makati. 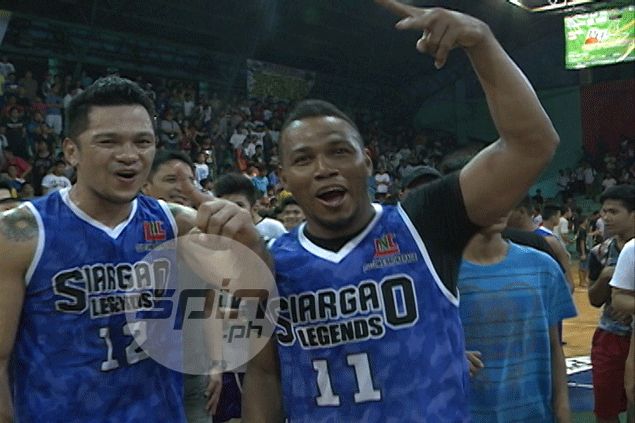 "'Yun game lang ngayon, we won it because of his epic buzzer beating three pointer. That was simply amazing. Unbelievable," he added.