Can old SMB teams beat Fajardo and Co? Danny I, Racela have no doubt they can

THESE days, only a few teams can match up – let alone defeat –a San Miguel Beer side that has cemented its status as the PBA’s most dominant team.

So if no one from the present field can do it, let’s look at the past to find out which team can stop the SMB juggernaut.

And where better to look than the previous batch of Beermen who had their own run of supremacy in the early 2000s?

Two star players of that squad of Beermen are confident they can not only match up, but topple their successors in a fantasy matchup.

Olsen Racela, a current Ginebra assistant coach who orchestrated the offense of the star-studded Beermen in the 2000s, believes his batch will prevail against the current crop, although he was quick to point out that the game has changed dramatically since their time.

“They solely rely on their starting five eh,” he added. “Kami, we have bench players who will really give quality minutes every game, so mas malalim 'yung bench namin sa current team now.”

Racela ran the point for that fabled San Miguel team coached by Jong Uichico and Ron Jacobs which won five championships in a span of nine conferences from 1999 and 2001 - and reached the finals in nine of 13 conferences until 2002.

The former Ateneo star had an abundance of options to feed in that team led by the two Dannys – Ildefonso and Seigle, as well as defensive lynchpin Freddie Abuda, Nic Belasco, Boybits Victoria, Dorian Peña, Dwight Lago, and Mike Mustre, among others.

On the other hand, the current crop coached by Leo Austria banks heavily on their fearsome five of four-time reigning MVP June Mar Fajardo, Arwind Santos, Marcio Lassiter, Alex Cabagnot, and Chris Ross, although the best has become even better with the addition of Christian Standhardinger.

This current batch has ruled six of the league's last 10 championships under coach Leo Austria, but these Beermen hold no fear for Racela.

“Kami, like I said, mas malalim kami,” he added of the Uichico-mentored side. “Lahat talaga nagagamit sa amin during that time – 10-man rotation yata kami that time.” 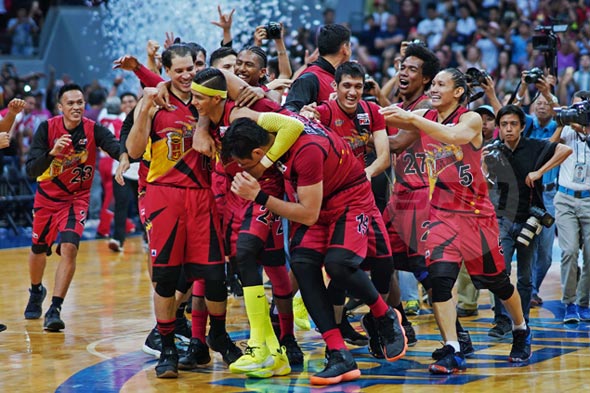 And the depth of the 2000s batch will be the biggest key to victory against the current batch.

Ildefonso echoed Racela’s sentiments not because of bias, but also owing to their deep roster.

And the two-time MVP believes they have someone who can stop his former apprentice, Fajardo.

On offense, Ildefonso beamed that he can score against Fajardo at will.