Which one has produced most number of PBA players? UAAP, NCAA or overseas schools?

THERE has been a long-running debate on SPIN.ph's social media platforms on which between the UAAP and the NCAA is the better league - and which has the better players.

Although we know that no tangible metric can be used to settle this debate once and for all, we decided to crunch up the numbers after the PBA released the 15-man rosters of its 12 teams to determine which college league has the produced the most number of players in the pro ranks.

Again, it will take more than these numbers to settle this issue, which, if we go down to the nitty-gritty, should also consider the quality of the players produced by both leagues, the quality of play, following from fans, and prestige.

But the numbers can still be revealing, as shown by the results.

Based on the current official lineups released by the PBA (15 men for each of the 12 teams counting the reserves), 74 came from the UAAP and 47 from the NCAA.

Top Cebu collegiate league Cesafi has five while 12 were not classified - either because they came out of college leagues outside the UAAP and NCAA, like Alaska's Vic Manuel (PSBA), or didn't go to college at all, like Mahindra playing-coach Manny Pacquiao (come to think of it, Pacquiao is the only active PBA player right now to technically come out of high school].

Here is the complete breakdown:

[Note: Slaughter was counted for both the UAAP and the Cesafi since he played for both UV and Ateneo in college] 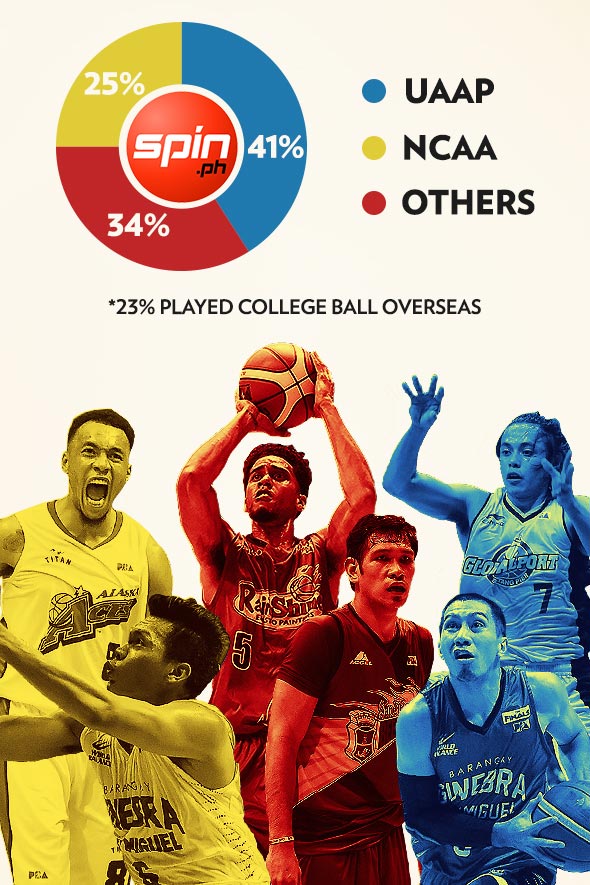 But in doing the math, we've also come across an interesting statistic: no less than 42 players from the current PBA roll were schooled overseas before taking their act to Asia's first pro league.

It's important to note that the PBA has a rule in place limiting the number of Fil-foreigners in each team's active roster to five - a cap which top player agent Matthew Manotoc rued as 'discriminatory' against Fil-foreigners.

[Note: By Fil-foreigners, we go by the definition that a player is such if he is born or raised in the US, even if he was born from Filipino parents]

And that do not include players who have foreign blood but grew up in the Philippines (i.e. Calvin Abueva, Ping Exciminiano, Marc Pingris) and players classified as Fil-foreigners who made their way to the PBA through the local college leagues. They are 20 in all.

Now, you can draw up your own conclusions.