TIM Cone dismissed the incident he had with top point man LA Tenorio, who he called out for missing two crucial free throws down the stretch in Barangay Ginebra’s PBA Philippine Cup win over Rain or Shine Sunday night.

Cone went to Tenorio following a timeout and gave him a piece of his mind for flubbing both charities that kept the door open for the Elasto Painters, who trailed by just four in the final 46 seconds.

Cone later said the game spat was just a normal thing between the them. Coach and player go a long way back from their days with Alaska.

“If you watch LA and I through the years, I’m always, always hard on LA. And he knows that,” said a smiling Cone in his post-game interview.

“We have enough strength in our relationship that we can get through those tough times. I forget about it, and he knows I forget about it. And that’s not gonna affect the way he plays the next game,” added Cone.

Tenorio did have a tough night against Rain or Shine, going 0 for 6 from the field and finishing with only four points, all of them from the foul line, where he finished 4 of 6. The last two of those free throws sealed the game’s final score.

Cone admitted the 32-year-old playmaker from Ateneo has been spotty from the foul line since he came over to coach Ginebra last season. He recalled Tenorio also missed two crucial foul shots in the waning minutes of the Kings’ 108-103 loss to TNT Katropa last week.

He noted Tenorio has been an excellent foul shooter while they were together at Alaska, averaging between 95 to 96 percent. And he hopes Tenorio will eventually come around at Ginebra since ‘he is the guy we rely on.’

“He’s the guy that we relied on to have the ball in his hands, we rely to have him fouled and get to the free throw (line) and make the other team pay,” said Cone. 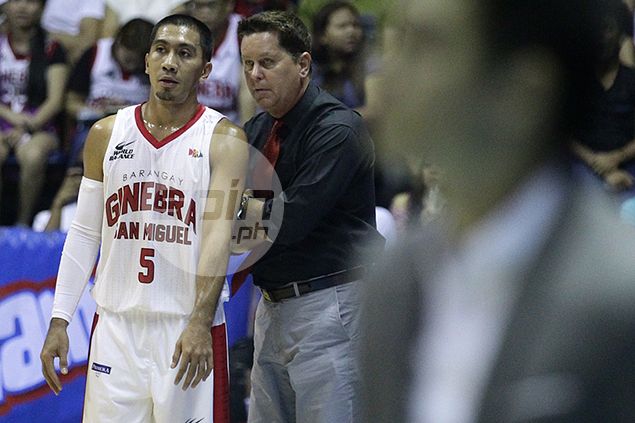 No way though, the Ginebra coach will lose his trust in Tenorio, missed free throws notwithstanding.

“He’s still gonna come and play his 35-40 minutes, and control the ball for us no matter what he does, whether making a turnover or missed a defensive assignment or whatever,” said Cone.

“He’s still gonna get out there on the floor because he’s our leader.”