BARANGAY Ginebra never seems to have enough of playmakers.

Acquired along with Raymond Aguilar in a trade with Blackwater for Chris Ellis and Dave Marcelo on Thursday, Dela Cruz is a versatile combo forward and underrated passer who Cone agreed to be a Devance play-alike when SPIN.ph broached the comparison.

“Obviously, there are similarities (with Devance),” Cone said after practice, Dela Cruz and Aguilar’s first with the Gin Kings. “Joe’s a playmaker. Scottie’s a playmaker. Some guys are scorers; Terrence Romeo, he’s a scorer; some guys are post-up guys; you got guys that are spot-up shooters and stuff.”

“We kind of thrive on everybody trying to be a playmaker,” he added. “That’s what Justin is. Justin’s not just a scorer. He’s not a scoring import; he’s a playmaker. We think Art’s the same way. He’s along the mold of a Joe.”

In his senior year at San Beda, Dela Cruz averaged over six assists per game in the eliminations and was the only non-guard to rank in the Top Five in the assists department.

“We like those kind of guys,” Cone said of playmakers. “Those kinds of guys fit our system really well.”

“(And) I think Joe’s the prototypical playmaker,” he added of the 35-year-old Filipino-American utility man. “I like to call him our Swiss Army knife, because you can pull out the little knife, the scissors, the bottle opener – whatever you need, he’s going to be able to supply for you… And we think Art has some of those skills.”

The 25-year-old Dela Cruz, who’s recovering from a devastating Achilles injury, is excited to learn from not just Devance, but ultimately from the league’s most successful coach in Cone. 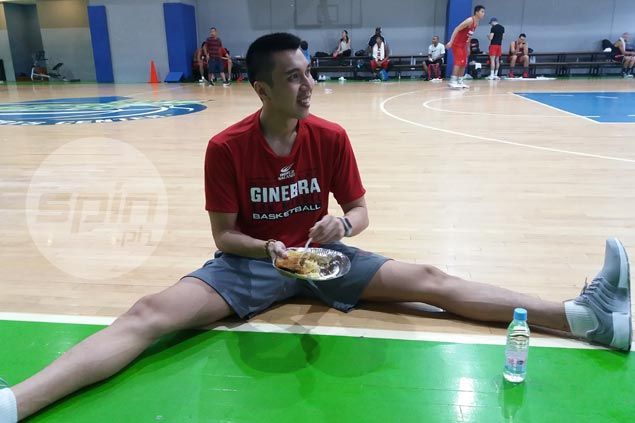 Dela Cruz said his rehab at Moro Lorenzo Center will be done by December, eager to be at the receiving end of the cheers from the league’s best fans when he steps on the court from thereon.

“Wala namang player na ayaw maging part ng Ginebra,” said Dela Cruz, who is technically without a contract as his two-year rookie deal expired on his first day at Ginebra on Friday, although he is expected to sign a new contract in the next few days.

And Cone is willing to wait as long as it takes to get Dela Cruz ready.

“It’s looking down the road, looking at the future,” Cone said. “We may not get him for another two to four months back in the lineup. We’re hoping we can get him back for the all-Filipino, but even if we can’t, we’re still going to be patient.”