There's a story behind every jersey number. Find out what No. 14 meant to San Mig guard Mark Barroca

[This is the first in a series giving Spin.ph readers the stories behind the numbers on the back of their favorite players' jerseys]

From important dates in their lives to lucky numbers to mere coincidence, there's usually a compelling story behind the numbers your favorite players wear on their backs.

And more often that not, these stories will either surprise you or make you feel closer to their cage idols. 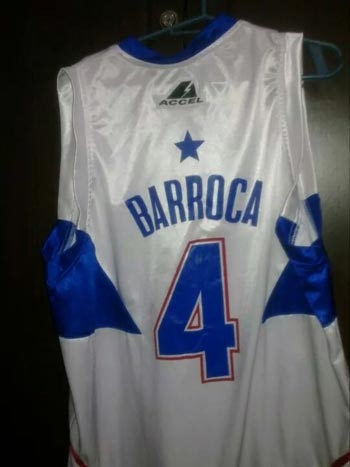 Did you know that since he began playing in basketball leagues, Mark Barroca has been used to wearing jersey No. 4?

The cat-quick Zamboangueno sentinel has worn No. 4 from his time with Far Eastern University in the UAAP to his stint as co-captain of the original Gilas team under Rajko Toroman (see inset picture).

Interestingly, Barroca did not play competitive basketball in elementary and high school as he was a varsity track and field star at Ayala National High School in Zamboanga.

The vastly improved point guard, therefore, was also bent on bringing up the No. 4 when he was picked by San Mig in the first round of the PBA rookie draft three years ago.

The number, coincidentally, also represented the October 14 birthdate of his wife, Ruselle.

Since the switch from No. 4 to 14, Barroca has enjoyed so much success in the pro league that he no longer intends to switch to his old jersey number even if it becomes available.