TALK 'N Text emerged champion in the 2015 PBA Commissioner's Cup by outduelling Rain or Shine, 121-119, in the first Game Seven in pro league history to go to double overtime.

Ranidel de Ocampo took over in the second overtime to bail out the Tropang Texters, who wasted a 15-point lead in regulation and found themselves hanging on for dear life in the first extra period in a game of wildly changing fortunes witnessed by a huge crowd at the Smart Araneta Coliseum.

De Ocampo's basket and three-pointer set the tone for the Tropang Texters in the second overtime before Larry Fonacier, steady from the foul line despite the grinding pressure, hit the two free throws that opened a 121-118 lead with 23 seconds remaining.

But it wasn't until Ivan Johnson grabbed the rebound after a deliberate miss from the free throw line by Paul Lee did the balloons finally fall for Talk 'N Text in a highly physical and tension-filled series that ended with the two sides exchanging big shot after big shot down to the very end.

De Ocampo was named Finals MVP after capping his series-long brilliance with a team-high 34 points in Game Seven, including the two big baskets that set the tone for the second overtime.

The 4-3 win in the best-of-seven series gave the flagship team of the MVP Group its seventh league championship and its first since the 2013 Philippine Cup under Norman Black.

"It was a relief," said Talk 'N Text coach Jong Uichico, quick to deflect the credit to the players who he said "made the big plays and the big stops."

Nonetheless, Uichico won the ninth championship of his career - and his first since leading Ginebra to its last league title in 2008 - as he joined Rain or Shine coach Yeng Guiao, Baby Dalupan, Tommy Manotoc, Chot Reyes, and Black in an elite cast of six coaches who have won titles with three different ballclubs. 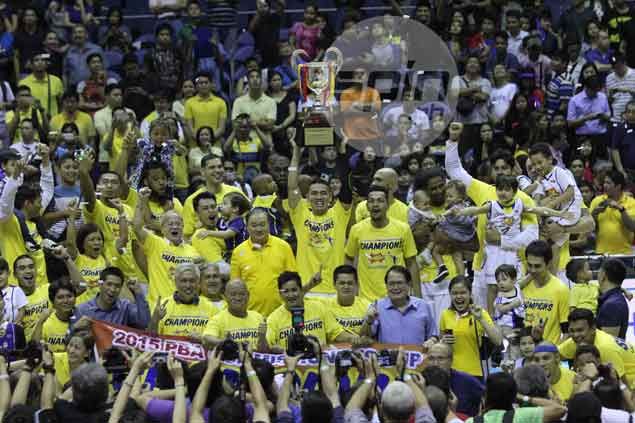 Johnson banged in 30 points and 11 boards while Best Player of the Conference Jayson Castro flirted with a triple-double after finishing with 24 points, 12 assists and nine rebounds.

Lee led the Elasto Painters with a new PBA career-high 38 points while Best Import Wayne Chism overcame a six-point first half by finishing with 34 and 29 rebounds. He also made the two big three-pointers late in regulation that paved the way for overtime.

Rain or Shine became the first team in 25 years to have four runner-up finishes in an eight-conference span, or since Purefoods did it from 1988-1990, according to PBA chief statistician Fidel Mangonon III.