SAN Miguel Beer supporters have cried foul after one member of a fans' club as well as a team staff were arrested by police, accused of scalping tickets before Game Three of the 2017 PBA Philippine Cup Finals against Ginebra on Wednesday.

KR Navarrete, a member of the fans club Blazing Beermen Clan, was picked up by plainclothes police officers near the yellow gate of the Smart Araneta Coliseum in Quezon City about two hours before the third game of the best-of-seven finals.

Acording to BBC president Ryan Ponce, he was supposed to get the tickets allocated for longtime San Miguel fans but was running late from work, so he asked Navarrete to get the 130 tickets they bought from Gladys Salvador, a San Miguel staff.

According to Ponce, the police officer, whose arms were already around Navarrete’s neck, insisted but Navarette refused to give in.

According to San Miguel officials, Salvador, who league insiders say is the official videographer of the team, was already inside the Beermen dugout when the fans sought his help on behalf of Navarette.

Salvador ended up being arrested by the police team, SMB officials added.

Ponce claimed the policemen intimidated Navarrete and Salvador when they tried to explained their side. The police officers also confiscated the tickets as well as the official receipt from the PBA office shown by Salvador.

After the commotion, Navarrete and Salvador were taken to Camp Karingal in Diliman, Quezon City where they were finger-printed and their mug shots taken before being held in custody.

Quezon City Ordinance No. SP 493 S-97 defined scalping as the 'unlawful selling and/or buying of admission tickets outside the authorized official booth, outlet or place designated for the purpose' and providing penalties for violation thereof. 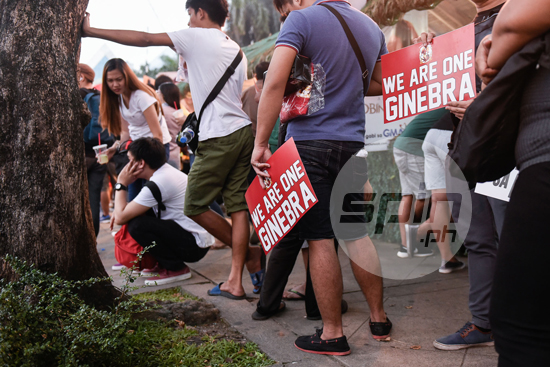 However, Navarette and Salvador insisted that the 130 tickets were bought from the PBA solely for loyal SMB fans and weren't meant to be sold for profit outside the venue.

After the game, San Miguel assistant coach Boyzie Zamar went to Camp Karingal to make sure that Navarrete and Salvador were fine.

Although charges were eventually dropped against the two, the fans' club lamented that their members weren't able to watch Game Three yet had to shell out a combined P44,000 for the tickets confiscated and never returned by the police.

Navarette and Salvador were also released early on Thursday.

However, some member of the fans club claimed some of the tickets confiscated by the police ended up in the hands of scalpers.