COLUMN: Horror SMB collapse will be hard to live down for Austria

CHICAGO - Leading by eight points, 90-82, late in the fourth quarter of Game 6, those perky "entering the finals" bonuses must have crossed the minds of the San Miguel Beermen.

With only 2 minutes and 56 ticks standing between them and another championship berth, all the Beermen needed to do was close out the show and grab the ticket.

Instead, they choked on the hot air of a 16-2 run by the gutsy, gritty Meralco Bolts, who staved off elimination by coming all the way back from a 16-point deficit.

[See Meralco come back from the dead in Game Six]

After collapsing like a smoker's lung, I wonder if San Miguel head coach Leo Austria can rescue his boys by doing a perfect Heimlich maneuver in time for Game 7 this coming week.

Game 6 was an inglorious night for a glorious franchise that had won the most titles in the PBA.

While basketball is no stranger to furious comebacks and bad beats, minor miracles such as the one Meralco just pulled off shouldn't have happened to a veteran, highly-experienced, and super-talented San Miguel.

Operating on a 24-second shot clock, there were 7.3 possessions left in the fateful 2:56 endgame. How do you give up 16 points?

Up that big that late, time became an ally to San Miguel. They should have milked those precious seconds and let their best player, June Mar Fajardo, do the work down under.

Interestingly, Fajardo, a massive and specially skilled 6-foot-10, 250-pound earth mover, only took one field goal in the last 2:56.

Isn't he a six-time league MVP and the leading Best Player of the Conference candidate?

Doesn't he always "get" the calls?

So, why not dump that damn ball to him in the low post?

Also, with the score tied at 90 with 1:05 to go, San Miguel emerged from a timeout with Jericho Cruz chucking a missed 3 with still nine seconds on the shot clock. I'm not sure about that play call.

To paraphrase an old dictum, players win games and coach Leo Austria, a four-time coach of the year awardee, squandered this one.

AARON IS THE NEW BLACK.

He sure ain't Stephy Curry but Aaron Black was in a hurry in Game 6, scoring his team's last 11 points. He was unstoppable as a forest fire.

We know this dude is good, but tonight was his star turn. He was calm, cool, and collected. With the game on the line, Aaron blitzed San Miguel's suspect defense with a made 3, an and-one, plus a bunch of pressure-packed free throws.

After the smoke subsided, Black had torched San Miguel with 17 points, five rebounds and six assists while leaking only one turnover. 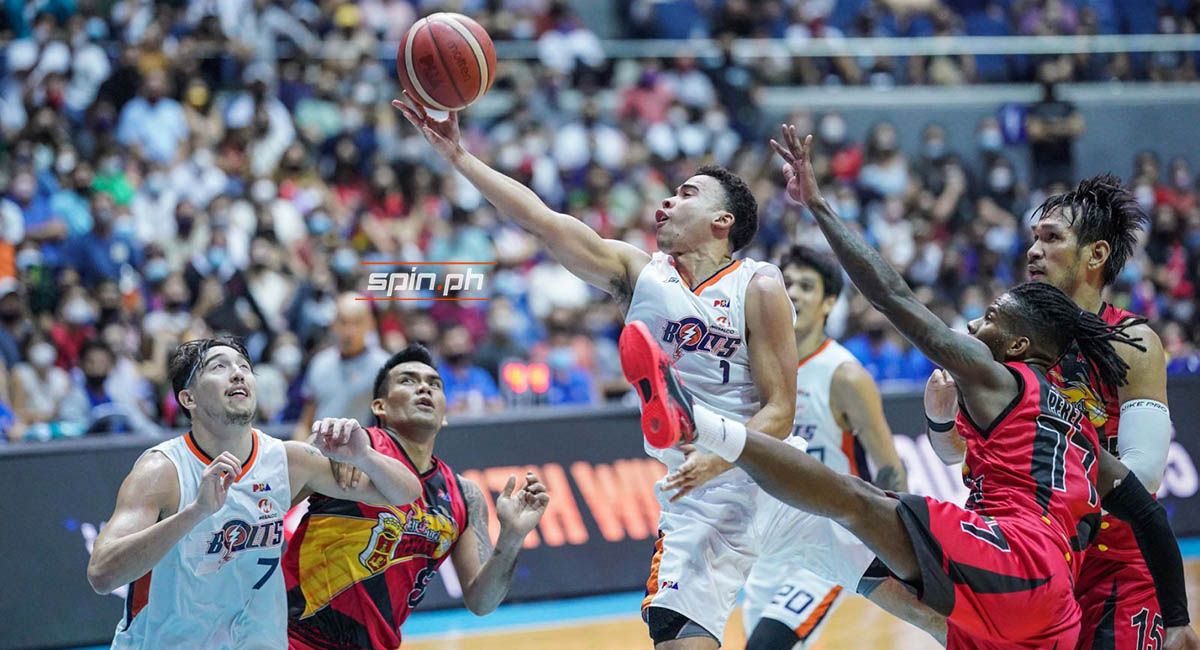 Black led the way. Others followed.

Chris Newsome tormented San Miguel with 19 points, seven rebounds and three assists while Cliff Hodge, that ever-turning energizer battery, was at it again, taking charges while whipping 17 points and 12 rebounds.

Before his disappearing act, Fajardo led the Beermen with 23 points while four others logged double figures with Vic Manuel pumping 16 while Marcio Lassiter and C.J. Perez combined for 27.

San Miguel is an assemblage of expensive talents. Meralco is a team.

I'm not foolish enough to count out the Beermen to win Game 7. As do many PBA fans, I'm leery of officiating in a Game 7 involving an SMC team.

But at this point in the series, Norman Black has clearly out-coached Leo Austria.