AN INTERESTING question was tossed to us by one of our readers: Was comedian Jaime 'Jimmy' Santos really a good basketball player before he entered show business?

For the sake of our readers, let's take this question seriously.

It's true that Santos was one of the first basketball players who ended up making the jump to acting, a career shift also taken by former PBA stars like Yoyong Martirez, Freddie Webb, and Joey Marquez, among others.

However, Santos' basketball credentials have been put under scrunity not a few times in the past - and often became a source of ridicule from his showbiz peers, notably 'Bossing' Vic Sotto, his co-host at Eat Bulaga.

Take this live exchange from one of the noontime show's Pinoy Henyo segments when Bossing and co-host Anjo Yllana ribbed Santos on his claim to being a former basketball player.

To view the full exchange, see this video from YouTube:

Perhaps the most damning verdict on Santos' basketball skills was delivered by former Ginebra playing-coach Robert Jaworski, who let loose a classic quote when asked about Santos, who, in his post-basketball years, became an ardent supporter of the popular PBA franchise.

Santos' PBA career was forgettable, to say the least. He played just one season in the pro ranks during the PBA's inaugural season in 1975, averaging 2.6 points in 13 games with Seven-Up where he had Jumbo Salvador - a member of a prominent showbiz clan - as teammate.

But all the information we dug up on Santos' basketball career wasn't all bad.

For example, did you know that Santos was a member of the Jose Rizal College (now JRU) team that won the NCAA championship in 1972, joining brothers Philip and David Cezar, Cris Calilan and the late Ed Carvajal. Coach was the late Francisco 'Kiko' Calilan.

To this day, no JRU team has won another NCAA championship.

Philip Cezar, in fact, was one of the few resource persons we talked to who attested to the contrary, saying Santos was a pretty decent banger and defender during their time together in the Heavy Bombers camp.

"Jimmy was a decent player, a reliable banger and defender. He can score underneath when he wanted to," said Cezar of Santos, who joined the Heavy Bombers a year ahead of the Crispa great. 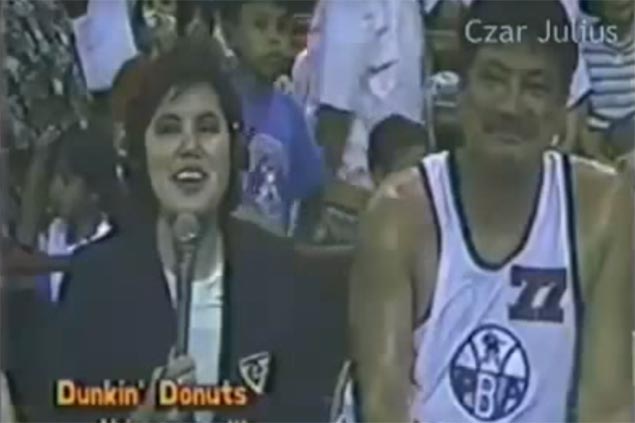 The Crispa Redmanizers forward, 64, even went as far as say that Santos could've had a decent career in the PBA had he not been lured into showbiz where he started out with villain roles in Fernando Poe Jr. movies.

Even during those days, Santos already liked to crack jokes, Cezar added.

To prove his point, the former PBA 'Tapal King' pointed to the 1991 PBA All Stars Legends game where Santos earned MVP of the Game honors.

Santos went on to have success as a comedian who became known for his 'I love you three times a day' line and got the hit movie 'Bondying' under his belt, but he kept in touch with his basketball roots.

He became a fixture at the Ultra (now Philsports Arena) and Cuneta Astrodome during Ginebra games and even wore jersey No. 77 as a nod to his friend and idol, Jaworski.