A SELLOUT crowd was on hand for the deciding game of the Smart Bro-PBA Philippine Cup Finals between defending champion San Miguel and Alaska Wednesday at the Mall of Asia Arena.

League media bureau chief Willie Marcial said he expects a crowd of not lower than 20,000 to watch the first ever Game Seven of the finals to be held at the Pasay venue.

“Estimated ko mga 20,000 ito or more,” said Marcial a few hours before the final game of the best-of-seven series that was made possible when the Beermen rallied from an 0-3 hole by winning the series' last three matches.

The current crowd record at the MOA stands at 21,808 registered just last Christmas when Ginebra rallied from 18-points down to beat Star in overtime, according to PBA chief statistician and Spin.ph columnist Fidel Mangonon III.

Tickets for the 25th Game Seven in league finals history were already sold out just days after San Miguel tied the series with a 100-89 win over Alaska in Game Six Friday night.

Still, a lot of fans lined up outside the arena hours before the match in the hopes of buying part of the additional tickets the league decided to sell on game day itself for the upper and gallery sections of the venue.

That fans’ interest on the 75th Game 7 in league history is high is understandable.

The Beermen are trying to become the first basketball team in PBA and NBA historiy to fight back from an 0-3 deficit to win a best-of-seven title series. 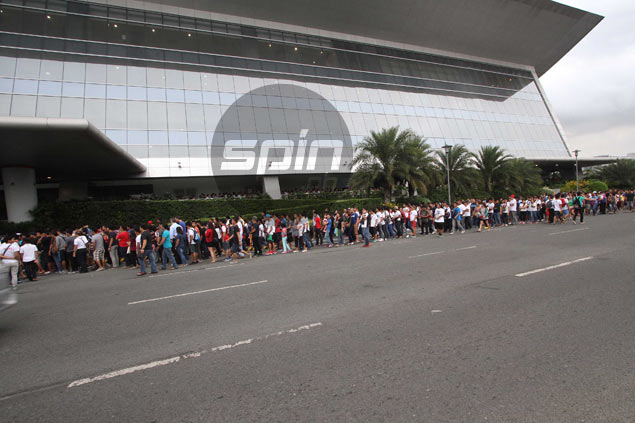 San Miguel will be eyeing its 23rd league championship overall and sixth Philippine Cup crown in hopes of tying the Star Hotshots.

Alaska meanwhile, is hoping to nail a 15th championship and its fourth all-Filipino trophy.

Incidentally, this marks the first time a champion team will be crowned at the MOA.

Here's a video of the crowd outside the MOA Arena: