AS Barangay Ginebra continues its pursuit of a first PBA Philippine Cup title in over a decade, young gun Scottie Thompson continues to amaze.

Amid an up-and-down campaign hampered by injuries and inconsistent play, the tireless six-foot guard stands out as one of the reasons why the Gin Kings are still in the running for their first all-Filipino championship since the 2006-07 season.

In the eliminations, Thompson averaged 11.2 rebounds per game, just behind towering big men June Mar Fajardo and Poy Erram in that department, to go with 11.2 points and 5.7 assists - good for second best in the league behind Meralco's Baser Amer.

His numbers put him on pace to match a feat done by the legendary Sonny Jaworski, who, according to PBA chief statistician Fidel Mangonon III, was the last guard to average in double digits in rebounds in a season after getting 10.2 boards in 55 games in his MVP season with Toyota in 1978.

Tim Cone, who had some wars with Jaworski back when he was still with Alaska, agreed with the comparison, but believes there’s still something distinct about Thompson’s body of work off the boards.

“I think the best rebounding guard I ever saw was Sonny Jaworski. He was really incredible. But he was more of a defensive rebounder, he would be inside and grab defensive rebounds and then go down the floor and make great plays,” said Cone.

“But I’ve never seen an offensive rebounding guard like Scottie. That’s a really special special skill. It’s a special skill for a big man, it’s even more special for a guard. It’s so incredible,” he added. 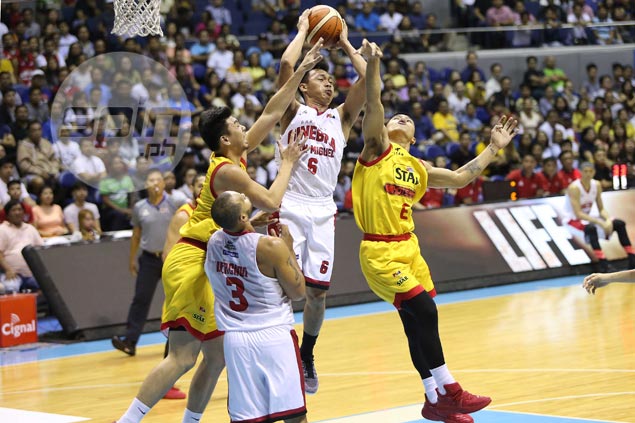 In their two-game quarterfinal series against Rain or Shine, Thompson upped his averages to 11.5 points, 13 rebounds, 6.5 assists and two steals as the crowd darlings swept the Elasto Painters to forge a rematch against last year's finals tormentor San Miguel.

What amazes Cone is how easy Thompson finds ways to go around defenders looking to box him out.

After seeing Thompson grab 17 and 16 rebounds in Ginebra's last two matches against the Elasto Painters, RoS head coach Caloy Garcia urged his wards to be more ‘physical’ and ‘aggressive’ on both boards.

Still the Digos, Davao del Sur native still hauled down 10 boards against RoS, which should have been more, according to Cone.

“He was in position to get five more rebounds today but they fouled him instead. But it’s just like getting a rebound cause they were trying to box him out and they fouled him and held him instead so it gives us another possession. Incredible skill,” Cone continued.

Thompson said he is just making the most of the situation given him.

With a myriad of scoring options in his squad, the former NCAA MVP out of University of Perpetual Help said he would rather focus on doing the dirty job for his squad.

The former Altas star averaged 13.5 points, 7.5 rebounds, 4.5 assists and 3.5 steals in the first two games against SMB, but needs to do more if the Kings are to overcome a 0-2 deficit.

Cone is counting on that. In fact, he's counting on his prized recruit to one day do something no player in the pro league's 43-year history has accomplished.

Thompson posted triple-double numbers during his time in the NCAA, but to average in double digits in scoring, rebounding, and assists in one PBA season?

Cone and Mangonon believes it's doable.

According to Mangonon, Ramon Fernandez came the closest to a triple-double season average after norming 27.8 points, 11.2 rebounds and 9.9 assists with Beer Hausen in 1984. Jaworski averaged 20.4 points, 10.2 rebounds and 8.2 assists in 1978 with Toyota.

“Once Scottie Thompson becomes Barangay Ginebra’s top dog, I think he can average a triple-double in atleast one season in the PBA, something no player has ever done in league history,” Mangonon posted on his Twitter account @thepbaologist.

“PBA legend and 4-time MVP Ramon Fernandez was five assists shy of doing that in 1984,” he added.

Should that happen, Cone would be the least surprised.

“He doesn’t surprise me anymore. Eventually his scoring is gonna catch up to his rebounding and passing and I think eventually he’s gonna be a 20-25 point scorer and then he’ll have the rebounds and assists," said the multi-titled coach.

"The problem right now is that he has that unselfish mentality, he doesn’t really look for that shot, we have to beg him to shoot,” he added. “As he gets older, a little bit more mature and confident, I think he’ll start looking for his shot and I think we’ll see some incredible triple-doubles - Westbrook-like triple-doubles - at some point in his career.”