BARANGAY Ginebra finally lived up to its never-say-die reputation as it stunned NLEX, 91-90, on Sunday night to strengthen its bid for twice-to-beat edge in the quarterfinals of the Smart Bro-PBA Philippine Cup.

Seemingly left for dead after falling into a huge 22-point hole, the Gin Kings authored an amazing revival behind their second stringers, led by intrepid rookie Scottie Thompson, to pull off the stunning reversal.

“We haven’t gotten a lot of bench production through the whole conference, so this is the first time our bench really, really stepped up,” Gin Kings coach Tim Cone said. “It couldn’t have come at a better time.”

The Gin Kings thus won a second straight game and six in 10 games for fifth spot to gain further separation from the Road Warriors, who were stuck in seventh place after dropping to a 4-6 win-loss record.

Thompson scattered 10 of his 14 points in the payoff period, the last two on the pressure-packed free throws that put the Gin Kings up for good, as this year’s fifth overall pick led a bench crew that also saw Dave Marcelo and Joe Devance step up.

Greg Slaughter paced the Gin Kings’ offense with 18 points, but shone more on the other end by coming up with two blocks down the stretch that preserved the come-from-behind win.

Sean Anthony had the chance to spare the Road Warriors the blushes after squandering a 75-53 cushion, but missed a point-blank stab in their last offensive possession. 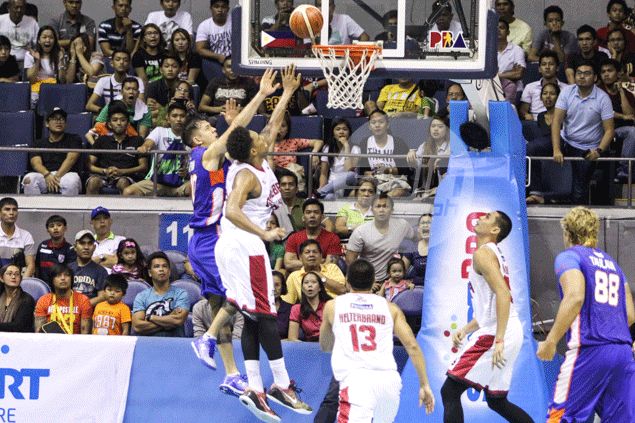 Asi Taulava fired a game-high 21 points and seven boards that went for naught for the Road Warriors.