THE Samahang Basketbol ng Pilipinas (SBP) is planning to bring in promising Fil-Australian Ethan Kirkness before the year end for training with the Batang Gilas pool.

The 14-year-old prodigy will be having a long school vacation in December for the holiday season, enough time for him and his family to enjoy Christmas with Filipino relatives and at the same test his skills against Filipino ballers of his same age or older.

“We’re planning to bring him to Manila for a five-week training camp this December, by which time mahaba 'yung vacation niya from school,” said Batang Gilas team manager Andrew Teh in a correspondence with SPIN.ph from Australia, where he’s currently visiting the Kirkness family.

[See Gilas future looks bright with Edu and Co., but the present is not as rosy]

Teh also watched the 6-foot-9 Kirkness train under ex-National Basketball League (NBL) player Greg Fox, one of the most accomplished players in Gold Coast who was once handled by many-time Australian national team member Shane Heal.

“He definitely improved a lot compared to before. But siyempre, medyo raw pa yung bata. He’s still 14 years old, although the potential is really there,” said the Batang Gilas official.

While Down Under, Teh also took the opportunity to present Kirkness his No. 51 Batang Gilas jersey. 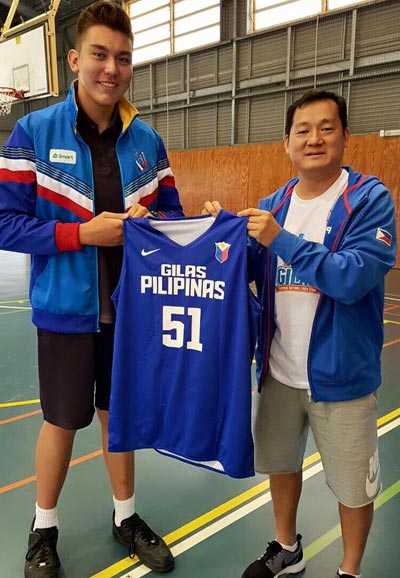 He added SBP, which first spotted Kirkness when he last visited the country in 2014, is now in the process of filing for Fiba accreditation for his possible inclusion in the Batang Gilas U-16 team.

The teenager, whose father is Australian and mother is Filipina, is already a holder of a Filipino passport.

If plans push through, Kirkness will team up with another young towering talent in Kai Sotto for the national squad.

“That’s the plan. Tapos by 2018 ilalagay na natin pati si AJ Edu for the Batang Gilas U-18 team,” according to Teh.

Edu of course is the 6-foot-9 Fil-Nigerian born in Cyprus and based in the UK, who visited the country recently with Filipina mother, the former Josie Litang, a native of Surigao.