Which SMB batch was the best in its five-peat all-Filipino title run?

EXACTLY a year ago, San Miguel completed an unprecedented five-peat, ruling the coveted Philippine Cup for a fifth straight season to annex its dynasty.

It's a feat like no other as the Beermen reigned atop the all-Filipino conference for a half-decade, cementing the franchise's dominance in the season's crown jewel tourney.

They say one's hardest competition is one's self and Spin.ph decided to put that to the test, comparing all five SMB championship teams in the past five Philippine Cups.

Which San Miguel team was the best among the last five Beermen crews that lifted the Jun Bernardino Trophy? 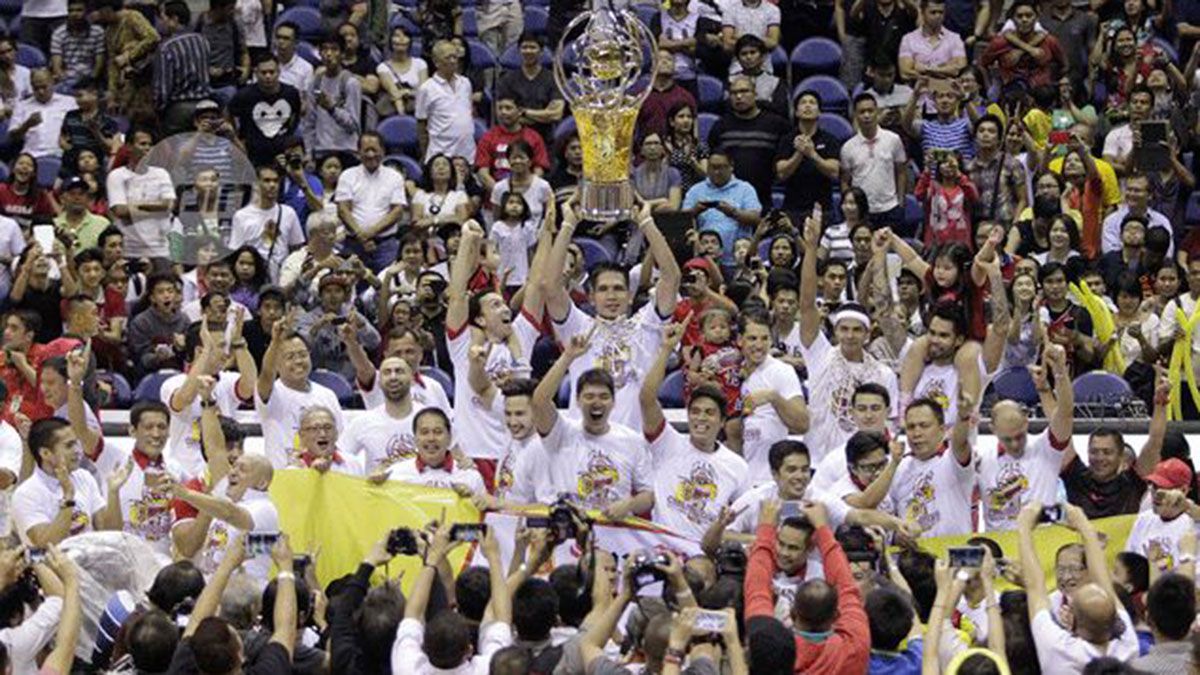 This is where everything started.

With Leo Austria assuming the head coaching role before the season started, San Miguel hoped to turn the tides around and end its Philippine Cup drought -- a crown it last won in 2001.

Riding the wave of momentum from his first MVP season, Fajardo was now the focal point for the Beermen, looking like a juggernaut as they won five straight games midway through the eliminations and vaulted to the top of the standings to gain the top-seed which comes with an outright semis spot.

As if it needed more firepower, San Miguel brought back Cabagnot in a one-on-one swap with GlobalPort in exchange for Sol Mercado and a pair of second rounders just before the playoffs began. Cabagnot quickly blended with the team which already featured the fierce wing combo of Lutz and Lassiter.

Yet as good as they were as evidenced by their semis sweep of Talk 'N Text, SMB was still an unproven bunch, as seen in its championship clash against Alaska, a team known for its comeback exploits.

It was a nip-and-tuck affair that lasted seven exhausting games, with Santos finally ending the curse with his now famous "Kamay ng Diyos" triple that put the Beermen ahead for good in the final minute of Game Seven. He was later on named as the Finals MVP.

This championship victory showed that despite the doubts, San Miguel was ready for the spotlight.

And boy, did they seize it. 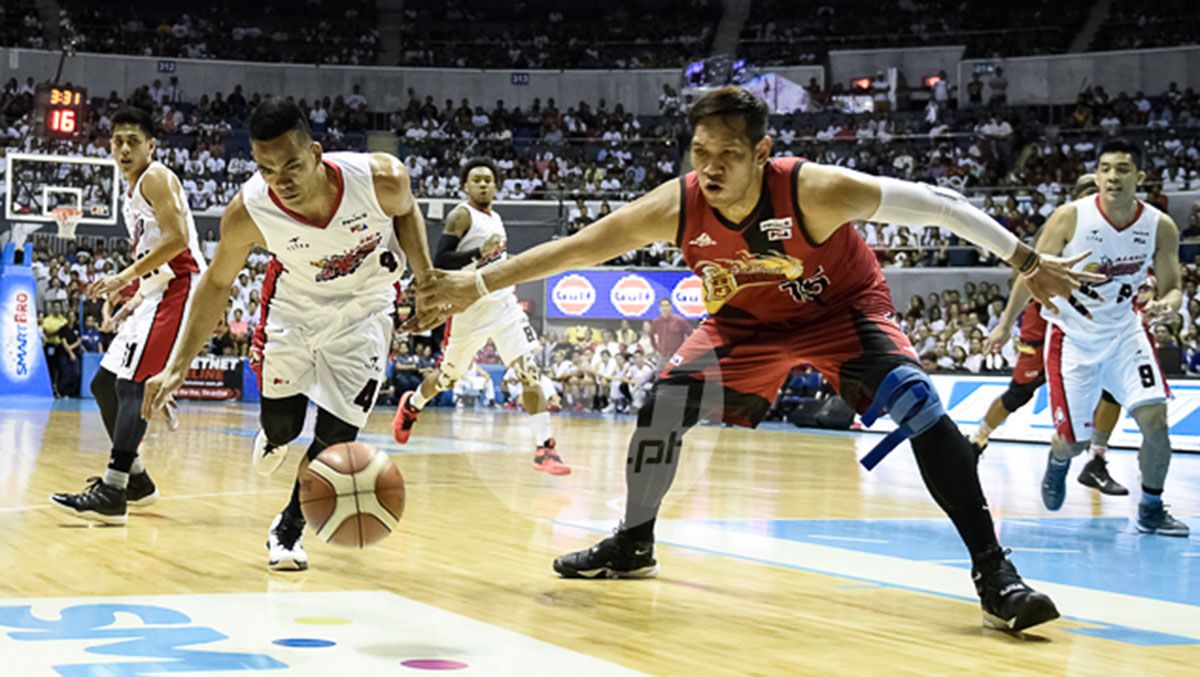 It was round three of the San Miguel-Alaska rivalry, with the Aces looking to finally get one over the Beermen after losing in both the Philippine Cup and the Governors' Cup the past season.

And it looked like finally, Lady Luck was smiling on Alaska as the mighty San Miguel came in to the Finals hobbling after Fajardo injured his knee in the grueling semis series against Rain or Shine. Calvin Abueva and Vic Manuel took full advantage of that, steering the Aces to a 3-0 lead as they were poised to finally get the redemption they were craving for.

Absent the whole Finals, Fajardo showed up to receive his Best Player of the Conference award in Game Four, serving as an inspiration as the Beermen began their fightback behind the magnificent performances of Santos, Lassiter, and Ross.

"The Kraken" was in uniform and played in Game Five, marking his return as SMB slowly got its bearings back and soon enough, the series was tied three games apiece.

Alaska tried to exorcise its bad luck in Game Seven, starting off with three consecutive timeouts, but that wasn't enough to cool off Ross, long regarded as one of the best defensive guards in the league, as the Fil-Am guard capped off his breakout conference and drilled four triples in the clincher to complete the improbable and take home the Finals MVP award.

Also worth noting were the standout performances of veteran Yancy de Ocampo and Gabby Espinas, who held the fort down low when Fajardo missed the first four games of the title clash.

It was a historic run that also deserved its own distinction: it was truly a "Beer-acle." 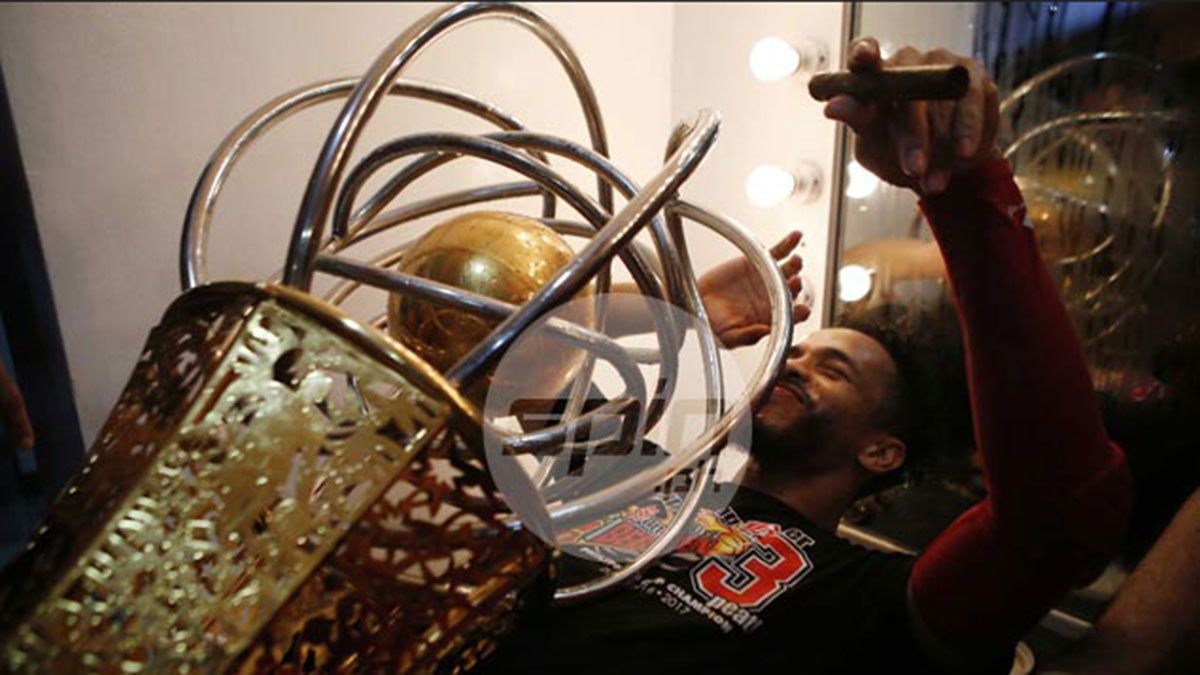 Chasing the vaunted Perpetual Trophy, San Miguel wasted no time showing why it's the league's standard-bearer.

Losing to Phoenix in its second game, the Beermen went on and racked nine straight wins to end the eliminations to snare the top seed before Garcia starred in their disposal Rain or Shine in the quarters.

Talk 'N Text, however, proved to SMB that its path to the championship won't be a cakewalk leaning on the trio of Jayson Castro, Ranidel de Ocampo, and Larry Fonacier.

It's just that in the end, the difference maker was the might of Fajardo who was unmatched down low as the KaTropa bowed out after seven games.

Ginebra looked like an able dance partner for the Beermen, especially after winning a hard-fought Game Two in Lucena to tie the series at one-game apiece.

But that turned out to wake up the sleeping giant in SMB as Santos, BPC Fajardo, and Finals MVP Ross rampaged to three straight wins and convincingly capture the three-peat.

Austria also seemingly solved the backcourt puzzle in this title run, fully utilizing the terrorizing three-guard combo of Ross, Cabagnot, and Lassiter which the Beermen have banked on for the years to come.

This also set this San Miguel team's first crack at the Grand Slam, with Charles Rhodes leading the team to the Commissioner's Cup title before faltering in the season-ending Governors' Cup. 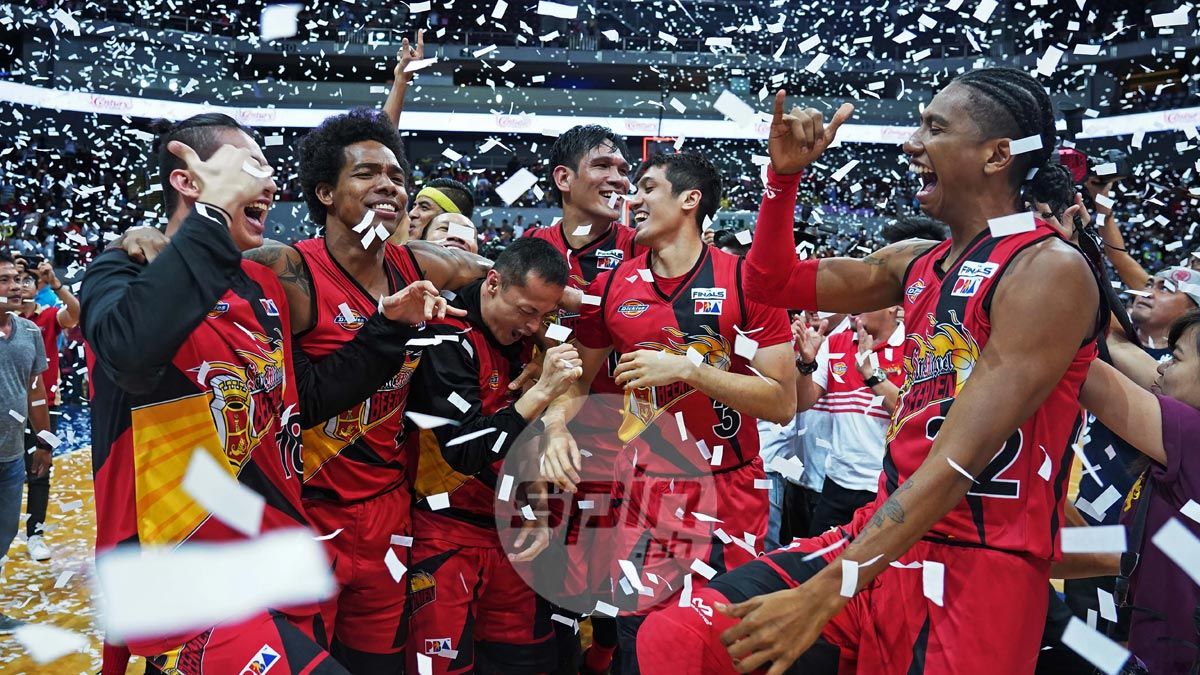 So dominant was this San Miguel team that it hardly needed the services of its top draft pick Christian Standhardinger, who was then suiting up for Hong Kong Eastern in the ASEAN Basketball League, and it still cruised to the title.

SMB won its first five games in the eliminations that set the tone for the whole conference as the quality quintet of Fajardo, Santos, Cabagnot, Ross, and Lassiter were just too much to handle for the league.

Add to that the quality minutes provided by the likes of Pessumal and Ganuelas-Rosser and it's no shock that the Beermen had little ease in bagging its fourth straight crown.

Fajardo was just playing on a different atmosphere all throughout the playoffs.

From the quarters against TNT, to the five-game Gentleman's sweep of Ginebra in the semis, to the Finals against Magnolia, the Cebuano giant was just plain unstoppable.

It also didn't help the opposition that Lassiter was shooting the lights out in the first four games of the championship series before ceasing the spotlight to Fajardo, who capped off this championship campaign with a 42-point, 20-rebound masterpiece in a double-overtime Game Five conquest to rightfully retain the crown. 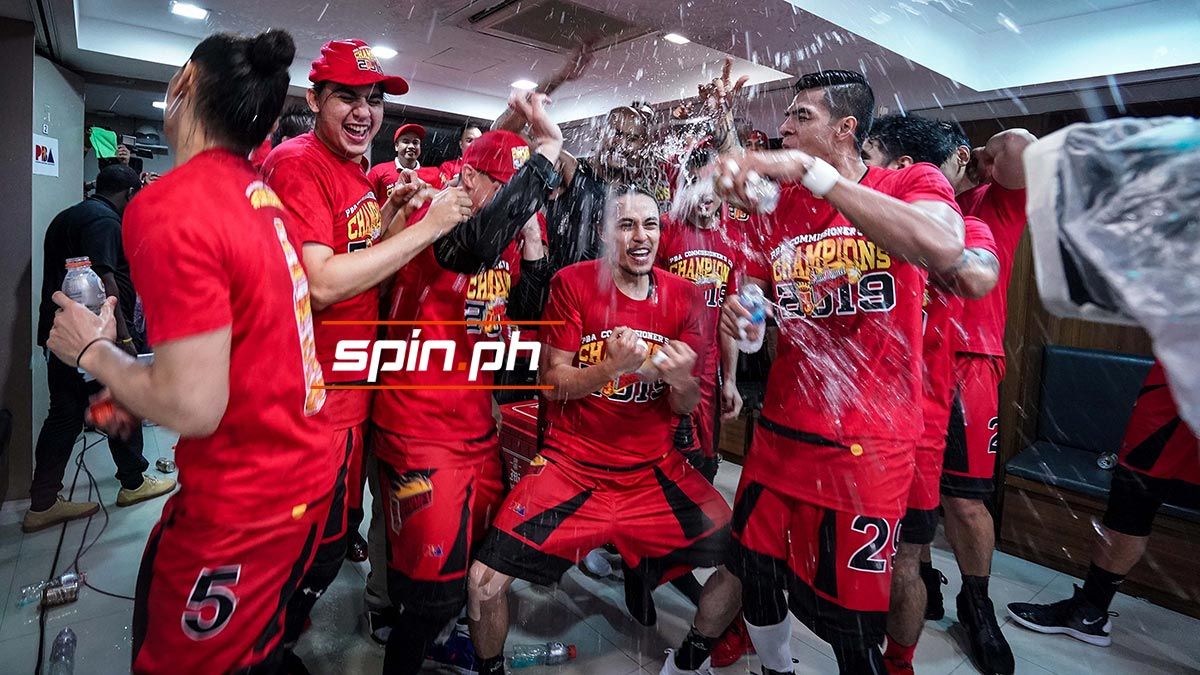 Easily, of the five SMB teams which won the Philippine Cup, this was the strongest on paper.

Imagine adding to the already potent Beermen side the likes of Standhardinger, who was bracing for his first full season in the PBA, and Romeo, a three-time Scoring Champion who was beleaguered in his time in TNT, and this one looked like a recipe for disaster for the league. Even then-Alaska coach Alex Compton couldn't help but comment, "Kawawa ang liga," even before the games were played.

Yet for all its strengths, it took time for SMB to get its bearings, as seen in it falling to the fifth-seed in the eliminations. One thing's clear, the drive for five will be an uphill climb.

Here's where the Beermen's embarassment of wealth comes in handy.

Standhardinger played the perfect omega to Fajardo's alpha, while Romeo found his footing as a killer off-the-bench option. But it's not just them, as Pessumal also enjoyed a breakout conference stroking it from deep while Nabong willingly provided spot minutes in the frontcourt.

Soon enough, San Miguel began its hike, outlasting TNT in a three-game quarters, bucking the momentum of top-seed Phoenix in five games in the semifinals, before bracing for a rematch against Magnolia in the Finals.

Tough as the ascent was, the Beermen defied the odds, including a controversial Game Five which saw an appearance of a Spiderman not named Arwind Santos that brought them down 2-3 in the best-of-seven series.

Once again, Austria went to his old reliable Fajardo as SMB took the next two games, with Cabagnot putting on the finishing touches with a killer fadeaway in the final minute to seal the team's fervorous five-peat.

San Miguel continued its dynastic run to the Commissioner's Cup behind Chris McCullough, before its Grand Slam aspirations lit up in smokes after off-court issues in the third conference, which also saw Standhardinger traded to NorthPort for Mo Tautuaa.