THE PBA may draw flak for adhering to its strict enforcement of citizenship requirements, but you also know where it is coming from.

After all, the last thing Asia's first professional basketball league wants to do is put itself in another precarious situation like it did two decades ago with Sonny Alvarado and his fellow players with dubious claims to Filipino lineage.

League followers remember Alvarado as the hulking forward who looked like the savior of the Tanduay Gold franchise as he was selected first in the 1999 PBA Draft.

Remember that this was the year that the PBA had its Fil-Am boom, with Danny Seigle going to San Miguel, Asi Taulava to Mobiline, Eric Menk going to Tanduay, Tony dela Cruz to Shell, Jon Ordonio to Pop Cola, Al Segova to Purefoods, and Rob Parker to Sta. Lucia.

But it was Alvarado who seized the spotlight, entering through the draft alongside collegiate stars Don Allado, Richard Yee, Bryan Gahol, and Gerard Francisco.

The Fresno, California native, who identified himself as a "Fil-Puerto Rican," was truly a force to be reckoned with and his collegiate career backed up his credentials.

Bouncing around in Long Beach State, New Mexico Junior College, and Gavilan College, he settled at University of Texas at Austin for his final two years and posted averages of 12.6 points, 8.2 rebounds, and 1.6 steals in his final season with the Longhorns in the 1995-96 season, making it to as far as the second round of the NCAA Division I Men's Basketball Tournament. 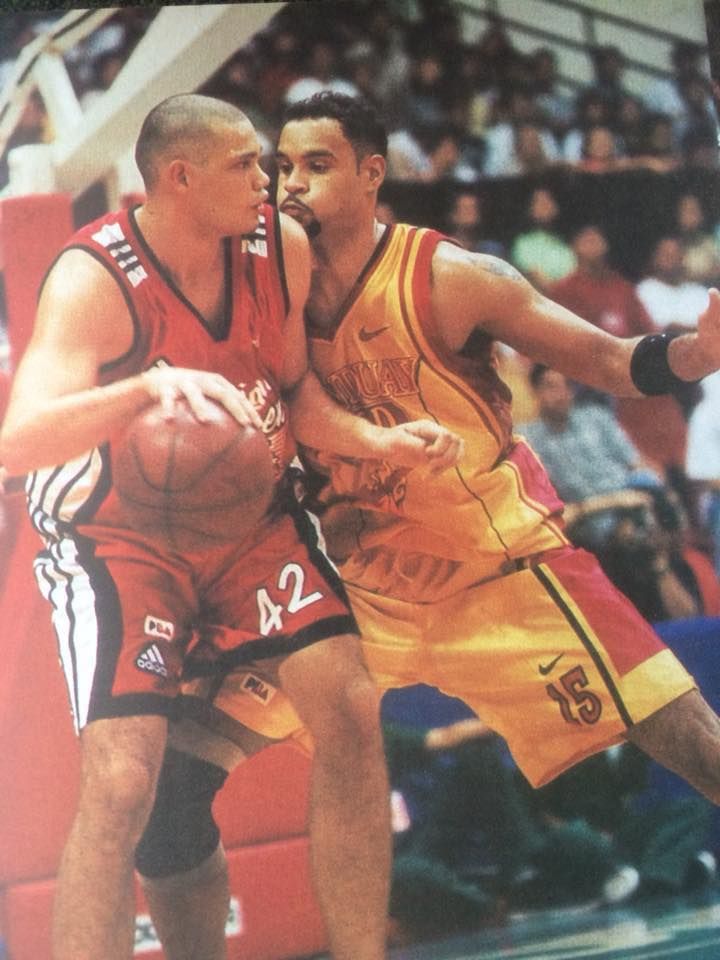 With his brute force, Alvarado immediately vaulted to prominence as he earned the moniker "The Punisher."

Many even believed that the 6-foot-7 banger had a legitimate shot at replicating Benjie Paras' feat of winning the league's MVP award in his rookie year.

Still, it was clear for the fans that with Alvarado, Tanduay has struck gold, pun intended.

He continued to lead the Rhum Masters in the ensuing conferences as he paired perfectly with another upstart in Menk, leading them to the fifth seed in the Commissioner's Cup and a third-place finish in the Governors' Cup.

It was also no surprise that he earned a spot in the All-Star Game, playing for the Rookies-Sophomores-Juniors team that lost to the Veterans, 91-85. You guessed right, Paras came away with the All-Star MVP honors at Philsports Arena. 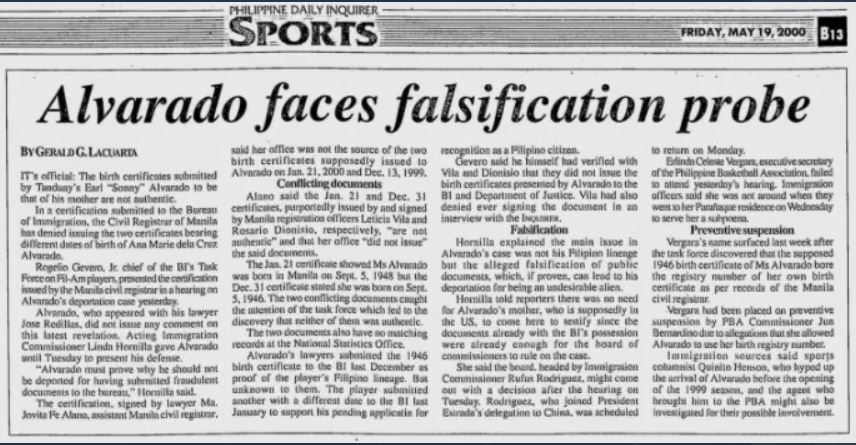 At the end of the season, Alvarado was as solid as they come, leading the league in scoring with 22.9 points, while also collecting 13.1 rebounds, 3.9 assists, 2.2 steals, and 1.0 block in 44 minutes across 48 games for the Rhum Masters.

Unfortunately, the top individual awards eluded him. He earned a Mythical First Team citation but lost the MVP to Paras and the Rookie of the Year honors to Seigle.

Surely, with that strong freshman season, big things were expected from Alvarado the following season.

Sen. Robert Jaworski called for an inquiry into Fil-foreign players on Sept. 17, 1999 following the expose from Sen. Robert Barbers noting that a number of players had falsified their citizenship documents. Alvarado's name surfaced as one of them, alongside the Fil-Tongan Taulava.

The case against Alvarado was dismissed in January, but the Bureau of Immigration and Deportation (BID) later reopened the deportation case in May following Taulava's eventual ban.

The BID, then headed by now-Cagayan de Oro Rep. Rufus Rodriguez, found that there's no record of birth in the Philippines of Alvarado's mother Ana Marie dela Cruz Alvarado as neither of the two birth certificates the player submitted were existing in the City Civil Registrar of Manila and the National Statistics Office.

Upon the investigation of the BID task force, Manila City Hall civil registry clerks Leticia Villa and Rosario Dionisio denied issuing the birth certificates of Alvarado's mother, which were submitted to the BID to prove Alvarado's Filipino lineage.

Villa even called it "a fake," with then assistant Manila civil registrar Jovita Pe Alano stating that the documents "are not authentic" and said that her office "did not issue" those papers.

Rogelio Gevero Jr., the head of the task force probing the said players, also discovered that the registry number on the falsified birth certificate of Alvarado's mother matched that of one PBA staffer.

On May 22, a day after Tanduay swept Purefoods in the semifinals of the 2000 All-Filipino Cup, the BID revoked Alvarado's Filipino citizenship.

Bernardino also forfeited Games Two and Three of the series, where Alvarado played for the Rhum Masters, putting the TJ Hotdogs ahead of the best-of-five series and triggered a legal drama between the club and the PBA.

A day later, the BID ordered the banishment of Alvarado, giving him 15 days to leave the country which he did with his wife.

Sadly, with him being proven as a "Fil-Sham," all those eye-popping numbers were wiped out from the PBA records in its over four-decade long history.

Alvarado even tried to make a comeback through the Metropolitan Basketball Association (MBA) with the Pampanga Waves in 2002, but things did not materialize as the league also folded that same year.

The entire controversy left the PBA in a crisis. By the 2001 season, a year removed from the humiliating issue, Tanduay sold its franchise to FedEx and left the league altogether.

It also proved a recurring nightmare for the PBA that three years later, a number of players like Taulava, Davonn Harp, Rudy Hatfield, and Eric Menk, just to name a few, were again embroiled in the issue. Over the years, though, those cases were soon resolved.

That's why one can't blame the league for safeguarding its ranks from the entry of players with unscrupulous documents, with the citizenship requirement from both the BI and the Department of Justice (DOJ) affirmation among those required from aspirants born outside of the country as early as in the PBA D-League.

The last thing the PBA wants to do is let history repeat itself.