Jaworski, who turned 72 last March 8, was seated at ringside ironically, facing the San Miguel team, while the 64-year-old Fernandez, was at the commissioner’s row as guest of league chief Willie Marcial, being now an official of the Philippine Sports Commission (PSC).

It was only when the PA announcer acknowledged their presence that the two met, with Fernandez, the league’s first four-time MVP, leaving his seat and walking over to greet Jaworski and give his longtime teammate at Toyota a hug.

Jaworski is acknowledged as the father of Barangay Ginebra’s never-say-die mantra, while Fernandez was among the first mentors of the 6-foot-10 Fajardo, who he took under his wings during his college days at the University of Cebu.

Asked what the two of them talked about, Fernandez said it was just a simple ‘hi,’ ‘hello’ thing.

“Sabi ko andito ka rin pala,” related Fernandez, the league’s all-time leading scorer, to SPIN.ph. “But actually, I expected him to be here, because I know he watches important games of Ginebra.”

“Honestly, I asked him how is he doing? Although I know he’s doing very well.”

PSC commissioner Charles Maxey, who was seated beside Fernandez, was overwhelmed with joy seeing the two legends get together again even for a brief moment.

“Without being biased, I think it was a nice gesture on Com. Mon’s part to stand from his seat, approach and acknowledge Senator Jaworski.”

As per Fernandez’s memory, it was the first time in a long while he and Jaworski met.

“We’ve met before na, but it was a function and not in a basketball game,” said ‘El Presidente.’ 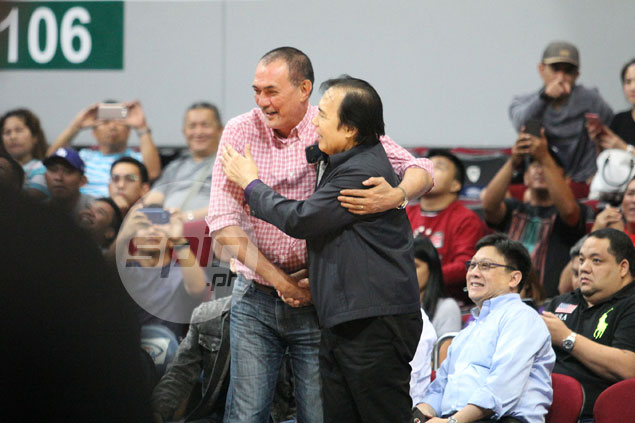