IT’S been a long, long while since Rino Salazar got to watch his former team Barangay Ginebra live in action and when he finally did, one player easily caught his attention.

Salazar had his eyes fixed on the sophomore guard for most of the time in the Kings’ PBA Philippine Cup game against NLEX Sunday night. The former Ginebra coach was sandwiched at ringside of the Astrodome by former players Peter Aguilar and Mike Advani and saw their former team walk away with a 90-80 victory.

Asked later who among the Ginebra players left an impression on him, the former pro mentioned the name of the do-it-all Thompson without batting an eyelash.

“Malaking tulong sa team yung bata na yan,” said Salazar, who is scheduled to fly back to the US with wife Rose after a three-week vacation in the country.

“Mabilis tsaka may hustle pa,” he added. “At may rebound kahit guwardiya.”

Thompson did an all-around show for the Kings, scoring 11 points, grabbed eight rebounds, and dished off nine assists in 32 minutes of play. He and backcourt partner LA Tenorio provided the spark in the Kings’ comeback from as much as a 37-20 deficit in the second quarter.

While he lauded the combined efforts put by the two Ginebra playmakers, Salazar thought the Kings were very inconsistent especially in the opening half.

The former Toyota and Tanduay player said if only NLEX coach Yeng Guiao had enough material, the Kings could have been on the ropes late in the game.

“Medyo inconsistent yung team. Hindi maganda yung simula, buti nag pick-up nung second half,” said Salazar, who coached the league’s most popular ballclub from 1999 to 2000 and for a long time, was the trusted lieutenant of playing-coach Robert Jaworski.

So is Thompson good enough to play for the old, fabled Ginebra teams, whose bruising backcourt was made up of Jaworski, Chito Loyzaga, Dante Gonzalgo, Leo Isaac, and Rudy ‘The Destroyer’ Distrito.

The former Ginebra mentor also made an observation on big man Japeth Aguilar, who he said is very athletic and versatile, but needed to toughen up inside. 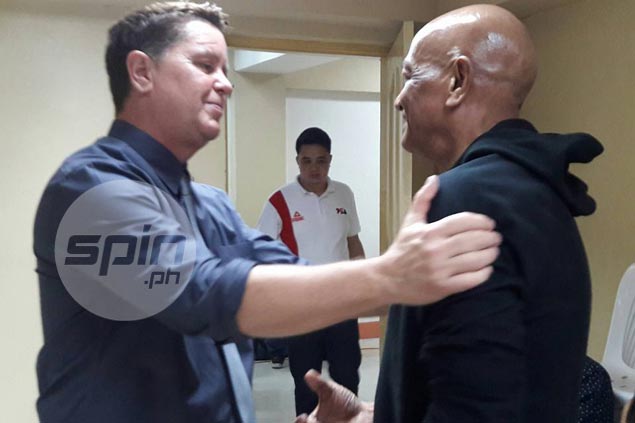 But Salazar said Ginebra is in good hands with coach Tim Cone, who he met later and had a short chat with after the game.

And for someone whose well versed about Ginebra’s history, Cone was quick to pay Salazar the ultimate compliment.

“You’re a big part of Ginebra history,” Cone told Salazar before the two champion coaches gave each other a warm hug.