DOUBLE KNOT? WHY NOT? Tying shoelaces the simplest of tasks for pro player, but not for Maierhofer

PUTTING on shoes and tying shoelaces is one of the first tasks a basketball player does before he steps on court.

It's supposed to be a simple task, but no longer for Rico Maierhofer.

After getting embroiled in a 'shoe-palpal' incident that led to worldwide attention and a huge fine, the lanky Barako Bull forward is paying extra attention to his shoelaces and, more importantly, his shoes.

Maierhofer got himself in hot water in Barako's game last May 28 when he attempted to block a shot by San Miguel Beer's Gabby Espinas by using a shoe he lost in a previous play.

That would not have happened, of course, had someone not stepped on his shoe and knocked it loose.

The bizarre play went uncalled by the referees but soon invited scorn from rival coaches and fans and spawned a rules crisis for the PBA, which had no specific provision in its rule book covering such incidents.

So what did the PBA do?

Commissioner Chito Salud fined Maierhofer P20,000 for 'blatant misconduct,' saying league rules are broad enough to punish Maierhofer for the 'shoe-palpal' stunt which he said made a "mockery of the game."

Poor Maierhofer. Not only was he penalized a heavy sum, the former La Salle star was also left contrite and regretful in the end, vowing never to do it again.

So what did he do the next game?

Maierhofer was spotted in Barako Bull's succeeding game against Rain or Shine on Sunday spending more time on the bench to make sure his shoelaces are tied tight and strong before he sets foot on the court.

A Boy Scout knot, perhaps? Or maybe a double or triple knot? Why not? Anything to keep the shoe in place for the duration of the game.

And in the unfortunate event that a shoe will come undone again during a game, Maierhofer vowed he will know what to do. 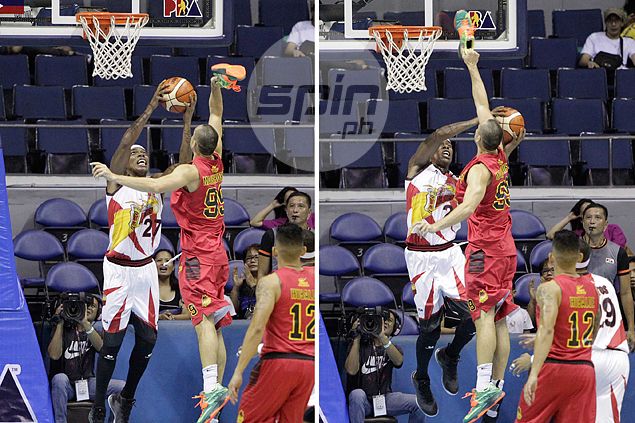