RICARDO Ratliffe gives Star a different dimension than what Tony Mitchell provided as he is set to make his return to the Hotshots on Wednesday night in their PBA Commissioner’s Cup game against TNT KaTropa at the Mall of Asia Arena.

Hotshots coach Chito Victolero stressed that Ratliffe has been their first-choice import for the midseason tournament ever since, but had to wait before his season in Korea was over.

They initially settled for Mitchell, who has shown flashes of dominance in leading the team to a still commendable 6-2 win-loss record.

But After Ratliffe’s season in Korea came to an end, the Hotshots wasted little time reconnecting with Ratliffe as Victolero continued to search for a true inside presence with Marc Pingris still sidelined with a hip injury.

“So mas kailangan namin yung inside presence ni Ricardo ngayon,” he added of the 6-foot-8 American big man, who averaged 27.5 points on 57.1-percent shooting from the field and 85% from the charity stripe, 18.1 boards, 2.4 assists, and 1.3 blocks in 39.5 minutes in eight games with star in last year's Commissioner’s Cup.

[See Ricardo Ratliffe arrives to take over from Mitchell at Star]

In that edition of the midseason tournament, Ratliffe steered the Hotshots to a 4-2 record after the team started the conference at 1-4 with Denzel Bowles, leadingthem to the playoffs. There, the Hotshots took top seed and twice-to-beat San Miguel to the two-game limit before folding. 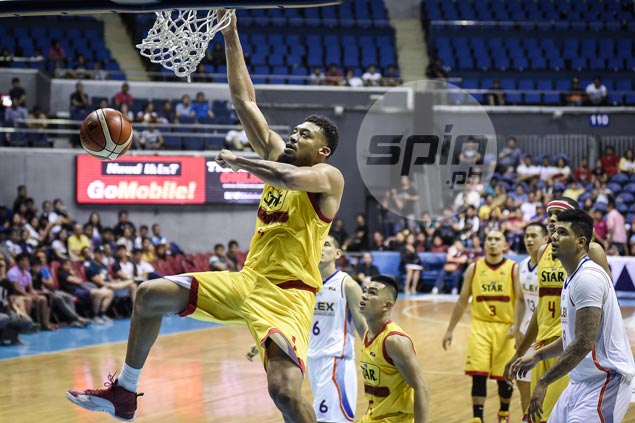 Ratliffe went straight from Korea to Manila after his team fell short in winning the championship there – and is now eager to get over the hump, for the Hotshots this time – starting in the game against the Texters at 7 p.m. as he matches up with another prolific import in Donte Greene.

“This is a very good game kasi maganda din yung nilalaro ng import nila, and bago ang import namin, so we need to adjust,” Victolero said. “And Ricardo needs to adjust to the locals.”

Still, the Hotshots left a window open for Mitchell, putting him on the reserve list to give them a chance to still tap his services in the future.

“He’s very positive,” Victolero said of Mitchell, who the team treated to dinner on Monday night. “He knows kung ano yung situation. I’m very thankful to him kasi he’s very professional. Even if he knew na may replacement siya, he played his heart out.”