COLUMN: Growing pains as Rey Nambatac groomed to be ROS' next go-to guy

RAIN or Shine’s Rey Nambatac has been stuck in a rut for quite a while now.

The expectations were that he would elevate his game after a solid, efficient sophomore season, but so far that has not been the case for the former Letran standout, who has yet to showcase the level of stability that earned him a place among the league's rising young stars. After averaging 10.5 points on 44.5 percent shooting in 47 games back in 2019, Nambatac has only managed 10.0 points in the past two conferences while hitting below 33 percent of his shots in both tournaments.

His struggles, though, didn't really discourage Rain or Shine brass from inking Nambatac to a three-year max contract in early November — an extension that basically cements his spot as part of Rain or Shine's core for the foreseeable future.

Rewarding a player with that type of production a lucrative extension would normally raise some eyebrows, but this isn't one of those typical situations. For an independent franchise that has relied on polishing diamonds in the rough rather than shopping for stars through trades or through free agency, retaining someone like Nambatac — a savvy lefty with an improving offensive repertoire and a slew of clutch performances to his name — was a task that was "of utmost priority," according to head coach Chris Gavina. 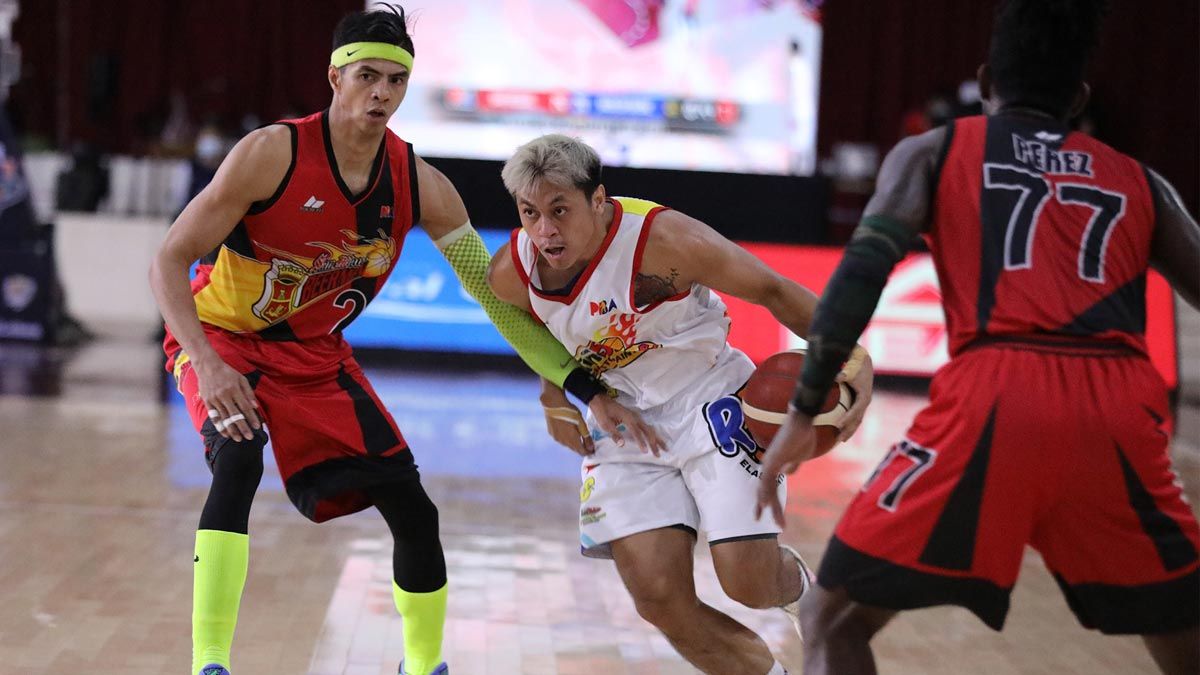 It was also the ultimate show of trust. Rather than taking a gamble on what should be a robust draft filled with highly-capable Fil-foreign talents in next year's proceedings, Rain or Shine decided to play it safe by going all-in on a proven commodity in Nambatac, even with his struggles in full view.

"Our trust in Rey has never wavered even through his struggles because he's one of those talents with a limitless ceiling," Gavina shared. "Although we knew there would be an influx of Fil-am talents going into next year's draft, Rey has already established himself as one of the up-and-coming stars of the PBA. So securing that level of talent became of utmost priority for us in order to secure that potential in our organization in the next few years."

Of course, the deal comes with expectations: The 27-year-old guard has to produce on offense like a player indeed worthy of a max deal for Rain or Shine, a squad that is elite defensively but has posted a bottom-two offensive rating in each of the past three conferences.

"Our culture is built on hard truths. He accepted the hard truth that there were times last conference that he was very inconsistent, and that's one of his motivations going into this conference — being that consistent figure for us in making plays when we need it on both ends of the floor, and being the stabilizer we need when our backs are up against the wall and we're fighting to survive," Gavina disclosed.

Nambatac improving his efficiency could be one of the factors that could lift Rain or Shine from the ranks of the league's worst offenses, but the team isn't pinning all their hopes on him; lifting a junky Rain or Shine offense is a hard ask for any transcendent star, let alone a guard like him going through growing pains. Sure, he'll have to shoot better to live up to the contract he got, but the Elasto Painters acknowledge that they also have to make things easier for everyone on offense — Nambatac included.

"Our player development has been working overtime in creating more offensive threats on the floor at all times," he explained. "I feel the more balanced our scoring is, the harder it will be for teams to make defensive schemes against guys like Rey, and it will allow him more freedom to do what he does best knowing that he can rely on his teammates if defenses try to be aggressive on him whenever he has the ball."

Outside of Nambatac and Javee Mocon — who, by the way, projects to be one of the league's best two-way menaces if he continues his upward trajectory — Rain or Shine's roster isn't really littered with gifted scorers. But some pieces offer intrigue; of eight players who scored more than 10 points per 36 minutes, three guys in Santi Santillan, Norbert Torres, and Anton Asistio can be legitimately consistent contributors on offense down the line.

Torres (7.1 points on a team-high 55.2 TS% in just 17 minutes) feels like a mini Beau Belga at times — a burly big man who can extend his range from the outside. Asistio, who is bound to be more comfortable, has taken the fourth-most threes per game among all rookies (3.9) despite playing under 20 minutes a game and hit 31.4 percent of them — normally not ideal, but just above league average last conference. Santillan, of course, offers the most upside as an inside-out big man and was the only rookie to average a double-double per 36 minutes (15.4 points, 10.4 rebounds) in the recent Philippine Cup.

Adding more threats like them elsewhere could make life easier for Nambatac, whose efficiency could see an uptick as he continues to play off of others instead of dominating the ball.

There is some credence to Gavina’s comments about Nambatac being Rain or Shine’s Devin Booker if we’re talking about off-ball scoring; per NBA.com/Stats, some of Booker’s most efficient shots this season have come on catch-and-shoot possessions and when he gets within 10 feet of the basket. The Phoenix star has also been pretty efficient when he’s taken 0-2 dribbles, when he’s only touched the ball for less than two seconds, or in shots statistically classified as “open” or “wide open”.

There are no publicly-available stats to determine the same for PBA, but a quick look at the film on some of Rain or Shine's games suggests that Nambatac is theoretically more efficient when he plays off the ball — as a cutter, a spot-up option, as someone who flies off of screens to get himself open for a shot, or as a guy who takes a dribble or two to get downhill for a closer, easier shot.

“I feel he has the ability to be more of a scorer off the ball. As effective as he is with the ball, I'd want for him to find ways to not to work so hard and have to deal with hard shows, traps, or ice coverages that are geared to either make him give up the ball or prevent him from getting into open space, where he has proven himself to be quite deadly,” Gavina detailed.

“Another aspect of Rey's evolution into a more potent and consistent scorer is how his teammates can maximize his skill sets on the floor by generating easier shots for him by setting him up on drive-and-kick opportunities, on roll and shake actions where he's receiving the lift pass after a good roll to the basket, or simple pin down screens for him where he can get quick shots at the rim or more opportunities to get himself to the free throw line,” the mentor continued.

Of course, attaining that result involves some tweaks to their overall offensive approach. The Elasto Painters’ system is pretty modern and egalitarian — they led the league in percentage of shots assisted despite ranking 11th in assists, and 43.6 percent of their shots (second-highest) have come from long range — but they simply don’t get a lot of chances to score and ranked dead-last in possessions.

Gavina conceded that a lot of it had to do with Rain or Shine’s inability to consistently attack the paint. There’s a bit of a domino effect; if they can’t attack inside, they can’t draw a lot of fouls, so they can't get a lot of free throws, which are the easiest points to get in basketball. The Elasto Painters were a bottom-four team in free throws attempted last conference and only cobbled together 91.2 points per 100 possessions — a paltry figure worse than any team not named Blackwater.

"The times when we stayed in attack mode and dominated points in the paint, we usually won that game. But the times when we settled for outside jump shots and not getting any paint touches was when we struggled offensively,” Gavina said. “The highest points per possession percentage-wise comes from getting to the free throw line, and we didn't do a good enough job of getting those opportunities from shooting free throws, and I think that had to deal with our inconsistency in attacking the basket as a whole."

The numbers check out. In Rain or Shine’s wins, the team shot 51.4 percent inside the paint and got 21.2 attempts at the foul line. Those figures dropped in losses, where they only made 43.5 percent in the restricted area and attempted 18.2 free throws.

"We want to play at a quicker pace and more attacking style of play to boost our offensive output," Gavina opened. “Our emphasis going into this next conference is to attack the paint and create long closeout situations where we constantly put pressure on the defense, make sure our bigs roll hard and with a purpose to force the defense to rotate, and our guards have to be aggressive at the point of the screen and get into downhill actions," he added.

Rain or Shine can actually do all of that in the upcoming Governors Cup with the help of an import very familiar with the PBA: Henry Walker.

The NBA veteran is a pretty damn good scorer. Back when he last played for Blackwater in the 2018 Governors’ Cup, the 34-year-old swingman averaged 21.2 points on 57.7 TS% — seventh among 17 imports who suited up that conference, but second among reinforcements who hoisted more than six threes a game. That blend of volume and efficiency, along with his playmaking (5.1 assists, fourth) and defense (2.2 steals, second) should make him a perfect fit for the Elasto Painters.

“As the term goes he's a ‘bucket.’ That's what I liked about him,” Gavina remarked. “He addresses our lack of scoring tremendously. He's an import that's proven that he can put up big numbers as well as drive his teammates to play at a higher level which he did while he was playing for Blackwater."

All these factors — Walker, the need to attack the basket more to open up opportunities elsewhere — go back to Nambatac and his ability to be a more potent offensive force. Rain or Shine is willing to do whatever it takes to make him (and the rest of the guys around him) feel more comfortable on offense in a bid to take a step closer to the ultimate goal that is the championship; now, it's up to him to live up to the expectations have been placed upon his shoulders.

"We're looking forward to him propelling himself into that elite superstar class of players in the PBA. We have all seen glimpses of his evolution into stardom these past two bubbles, and we want him to strive to accept the expectations and characteristics that coincide with being recognized as a max contract player,” Gavina commented.