NLEX got a timely lift in its PBA Philippine Cup campaign with the return of veteran big man Enrico Villanueva from injury.

The veteran center finally played his first game with the Road Warriors after more than a month of being sidelined following surgery to repair a meniscus tear on his knee.

Villanueva contributed right away by finishing with seven points (on 3-of-7 shooting from the floor) and three rebounds in 17 minutes as the Road Warriors snapped a five-game skid with a hard-earned 110-98 win over TnT Katropa at the Angeles University Foundation Sports Arena and Cultural Center in Pampanga.

It was only the second game – and first since going through the knife – Villanueva had suited up for the team since being reunited with coach Yeng Guiao this season.

It didn’t come as a surprise the Road Warriors won both games in which the product of Ateneo suited up.

As the rest of the team try to adjust and learn the coaching system of Guiao, the 36-year-old Villanueva is the only one who feels at home running plays which he’s been familiar with for more than a decade now.

While there may be slight changes, basically it’s the same system Villanueva learned while playing for Guiao with Red Bull from 2003 to 2007.

“Kaunti lang, but it’s still the same. I just need to adjust during the games, but then a lot of the stuff that he does, we were doing it before na even during my time,” related Villanueva to SPIN.ph

“I was observing din naman even when he was with Rain or Shine. It’s still the same, pare-pareho lang naman yung tinatakbo.” 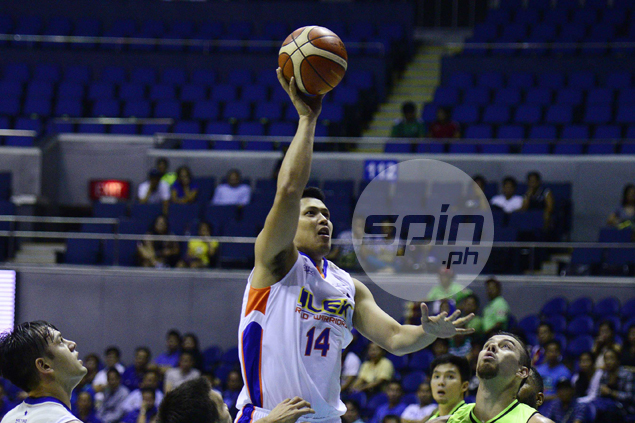 No doubt, Villanueva had his best years as a pro playing under Guiao.

He won his only championship with Red Bull during the 2005-06 Fiesta Conference, where he also emerged as the Best Player of the Conference following a hotly-contested race against Purefoods’ Kerby Raymundo.

That same season, Villanueva, selected seventh overall by Red Bull in the 2003 rookie draft, was named Most Improved Player and made both the All-Defensive team and the First Mythical Team.

His long association with Guiao has obviously made him the bridge between the temperamental coach and his NLEX teammates, who are not really familiar with the way things are run by the former Pampanga congressman, especially his frequent outbursts, both during games and in practices.

“Definitely, hindi ako nanibago,” he said. “Yes (I assist them) because they know I know the system and I know coach very much.”

“I really know kung ano ang gusto ni coach Yeng. I know his system and I know what he wants.”

Villanueva injured his knee during NLEX’s first game of the season against Alaska. Although it was already hurting, he played through the pain and was rewarded with an 86-84 win.

The injury however, proved to be a bit serious than earlier thought that Rico needed surgery right away. But nonetheless, the operation went well.

“I’m a bit disappointed with myself. I was really looking forward (to the reunion with coach Yeng) and I was training hard for two-and-a-half weeks, and then first game ganun pala,” he said.

All is not late, though.

With a 2-5 record, the Road Warriors are currently out of the circle of eight teams that will advance to the playoffs, but still have a chance to turn their fortunes around in their last four outings.

“May oras pa naman. Hopefully, we still have a chance,” said Villanueva.