SEVILLE, SPAIN - Two days from now, Gilas Pilipinas will come across a wiry, heavily tattooed player with braided hair unfortunately remembered back in Manila not for his supreme talent - but for one meltdown that led to a lifetime ban in the Philippine Basketball Association.

But Renaldo Balkman was quick to play down the significance of Puerto Rico's match against the Filipinos on Wednesday in the Fiba World Cup, making it clear - at least that's what he says on record - that he will treat it like any other game.

"I know, we'll face the Philippines two days from now," Balkman told Manila-based reporters who ambushed him for an interview, moments after Puerto Rico lost its second straight game in this quadrennial event, 75-82, at the hands of a tall Senegal side.

Looking forward to it?

"I'm looking forward to every game," he shrugged. "We gotta come out and play hard."

For Filipinos back home, however, it certainly won't be just another game. Balkman will be the one intriguing sub plot when Gilas takes on the Puerto Ricans in a match that will likely decide each other's bid to reach the knockout phase of this 24-team conclave.

Unfortunately, one infamous event defined Balkman in the eyes of Filipinos. That happened back on March 8, 2013 when the former New York Knick lost the plot and went amock during Petron's game against Alaska, choking teammate Arwind Santos and belligerently defying coaches.

That led to a lifetime ban for Balkman handed down by Commissioner Chito Salud that ended the title hopes of the Boosters, who, given the Puerto Rican's talent, looked a cinch for the championship.

Balkman's immense talent is again in full display in this tournament. Puerto Rico's game certainly revolves around NBA player JJ Barea and Carlos Arroyo, but there's no doubt that it will go nowhere in this tournament without the versatile Balkman in the middle.

Against Senegal on Sunday night, the 6-7 NBA veteran scored 21 points, grabbed seven rebounds and run rings around Senegalese big men who tower over him.

Puerto Rico's hopes, however, have been left in tatters due to injuries to starters Arroyo and Andres Vassalo. Arroyo played just 11 minutes against Senegal before limping off with an ankle injury. Vassalo followed him to the locker room a full quarter later.

Now Balkman said he is taking the responsibility of reviving Puerto Rico's flagging campaign, regardless of the injuries to the top pair.

"When they get off the bench, they should be ready to play. That's the main focus right now."

When the topic shifted back to the Philippines, Balkman, who said he has had chats with former Petron teammate June Mar Fajardo at the teams' official hotel, said he is open to playing in the PBA again in the unlikely event that his lifetime ban is lifted by Salud.

"No hard feelings, I love Manila," he said smiling. "I love the Philippines." 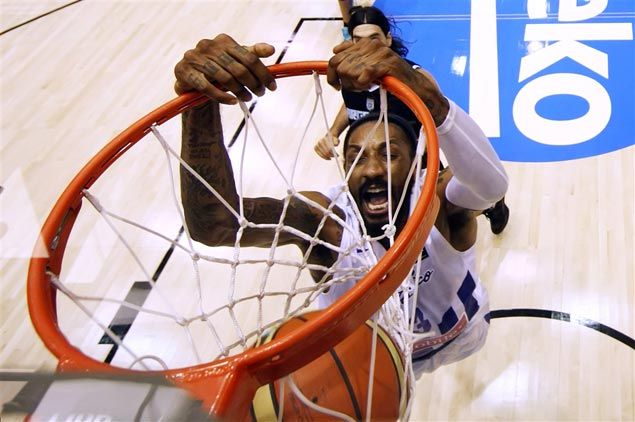