PUREFOODS import Daniel Orton went ballistic after an upset loss to KIA Motors, accusing the referees of making a 'mockery of the game' and labelling boxing champion Manny Pacquiao's foray into professional basketball a 'joke.'

Visibly frustrated after being held to six points and three rebounds in 19 foul-plagued minutes, the 6-9 import out of Kentucky said the referees' inconsistent calls kept him from putting up his best in a personal duel against KIA's 7-foot-3 import Peter John Ramos.

“Before the game, I was looking forward to it (matchup with Ramos), because I’m a guy who likes to battle it at the post,” said the NBA veteran. “They (referees) really took the game that I know and love and made it into a mockery tonight.”

Without Orton to help control the painted area, Ramos threw his weight around, finishing the game with 32 points and 26 rebounds to help the rag-tag expansion franchise pull off one of the biggest upsets in league history.

The loss was Purefoods Star’s second straight after starting the conference with four successive wins.

“I’m worried about the loss? Yeah. You hate losing two in a row. I know for Purefoods fans, that’s (back-to-back losses) not acceptable to them so I’ll come back even harder and stronger on Sunday. I promise you that,” vowed the Orlando Magic’s 29th overall pick in the 2010 NBA Draft.

“But this game seriously has become a joke on the way the game was going, and the refs made it into a mockery."

Orton, who had stints with the Oklahoma City Thunder, the Philadelphis 76ers and the Magic in the NBA, also said that Pacquiao’s brief appearance on the floor was part of the ‘joke.’ 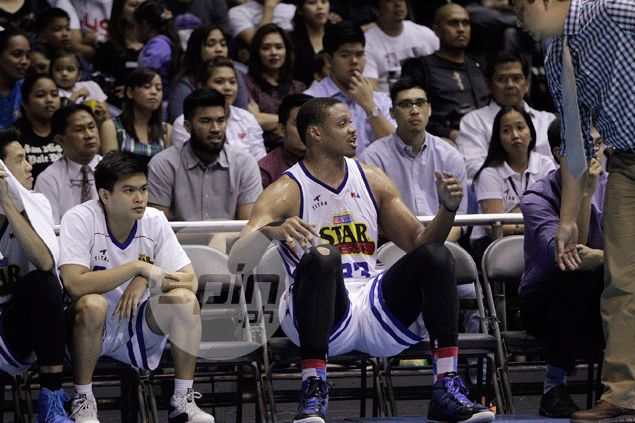 Ramos was quick to respond to Orton’s post-game rant, saying the way the match was called wasn't one-sided since he, too, got hacked and shoved during the game.

“This (game) was no joke. This was a physical game,” explained the Puerto Rican giant.

“He knows this is a physical game, but we’re gonna play hard. You know I got five fouls, and some stupid calls too, but I kept playing hard and kept my head in the game and we won the game,” he added.

Orton has figured in a couple of skirmishes both in the NBA and overseas during his career, the last one in China's professional league last December where he suited up as Metta World Peace's replacement import with the Sichuan Blue Whales.

He is expected to get a summon from the PBA Commissioner's Office for this post-game rant.