Seven teams, four PBA playoff spots. Here's what each one needs to do to advance

THE fight for playoff survival in the PBA Philippine Cup heats up on Wednesday night when three teams jockeying for positions see action at the Smart-Araneta Coliseum.

Phoenix and Blackwater face off in a crucial matchup at 7 p.m. after fellow postseason aspirant GlobalPort takes on last-place Kia in the first game at 4:30 p.m.

The Fuel Masters and the Batang Pier are tied for seventh spot with similar 4-5 win-loss records, while the Elite are hovering below them, in joint ninth place with TNT KaTropa and Meralco at 4-6.

And the results of Wednesday’s doubleheader will make the playoff picture a bit clearer.

Even so, the road remains hazy with still 512 scenarios possible as of Tuesday, according to PBA chief statistician Fidel Mangonon III, with five playdates left, beginning on Wednesday.

Here are the standings as of Tuesday:

Here’s what they have to do to at least move closer to the next round. Only then can we talk about playoff positioning.

The magic number for wins is six, so the Elasto Painters only need to win once in their last three games to book a postseason ticket, although they have the toughest schedule among the playoff hopefuls as Alaska, SMB, and Ginebra stand in their way, starting with the Aces on Friday night. 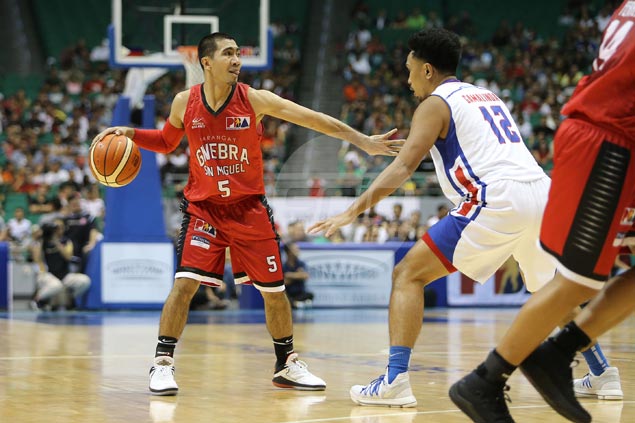 The sixth-running Gin Kings also still have control over their destiny as they just need to win their last assignment in the eliminations, the E-Painters on March 2, to advance to the Top Eight.

The Batang Pier can go through the playoffs outright if they win their last two games - against Kia on Wednesday and Phoenix on March 2. But the eliminated Picanto can spoil the party and derail GlobalPort’s bid and leave them with complications.

Like the Batang Pier, the Fuel Masters can join the playoff-bound teams without hiccups if they get past their final two-game schedule unscathed, starting with Blackwater on Wednesday. But a loss to the Elite will leave them in a must-win situation in their final match against GlobalPort to clinch at least a playoff for the last spot.

The Elite are in a must-win scenario in their last game of the regular season against Phoenix for them to leapfrog their would-be victims for the eighth and final spot. Even then, Blackwater will still have to keep its fingers crossed as they wait for the results of the remaining games.

The Texters also can’t afford to lose their final game in the eliminations on February 28 and they will have to set their affinity with NLEX aside in a battle of sister squads. Even if they beat the Road Warriors, TNT will have to be in wait-and-see mode before knowing their fate.

Earlier left for dead, the Bolts suddenly came to life following back-to-back wins, the latest a stunning 84-82 win over Governors’ Cup rival Ginebra last Sunday, that allowed them to claim a piece of ninth spot. Meralco has make it three wins in a row on Saturday when it takes on Magnolia in Cagayan de Oro to have a shot at the next round.