IT was that time of the year again when stunning ladies shared the limelight with basketball stars as the 41st season of the PBA opened in simple rites at the Mall of Asia Arena.

Among the muses were four volleyball stars who, at least for a day, traded their jerseys for the most glamorous dresses as they walked down the court looking every inch like beauty queens.

The Lady Eagles star, who was in a royal blue full romper done by Pablo Cabahug, got the loudest cheer from the crowd when she entered the court with Talk ‘N Text players. But the charming UAAP back-to-back MVP admitted she isn't too comfortable wearing her four-inch stilettos.

“It’s a really different field eh, it’s about sports pero being the one who’s wearing not the sporty attire ibang world ‘yun para sa akin so nakakakaba,” she said.

Earlier this year, the Ateneo star already conquered her fear of glamming up for ceremonies when she served as the Philippine contingent's flag bearer in the 28th Southeast Asian Games held in Singapore in June.

But it wasn’t her first time to doll up, the 22-year old pride of San Juan, Batangas bared.

“First time ko mag-muse? Ah, no naman pinasali naman ako ng nanay ko sa pageant, but then that was like 10 years ago,” she said while trying to keep herself from laughing. 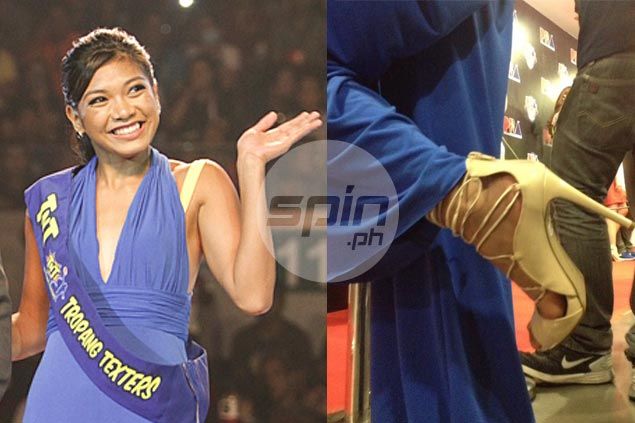 Mika Reyes, the fair-skinned La Salle volleyball star, was glowing in her body-hugging red dress as she represented Barako Bull.

Although it was not her first time to act a muse for a basketball team, Reyes said she had doubts the first time she was told of the offer to play the same role for a PBA team.

But upon hearing the confirmation from a friend who has friends with the Barako Bull management, Mika said she got ‘super excited.'

Although she’s not the type to back down from any opponent on the court, Reyes said she didn't bring her competitiveness to the event.

The experience was actually the second one for FHM Philippines' No. 8 sexiest woman in the country, having played the role with GlobalPort last year.

The night came with a lot of firsts for Alexa Micek, who served as muse for San Miguel Beer with Daquis.

“It’s my first time to be the muse and probably the longest time to be in heels," the Fil-American volleyball player for PLDT Home Ultera said. "That was an interesting experience.”

“I’m ready to take them (shoes) off but I’m glad that I survived, maybe four inches but that’s still too high for me. I prefer volleyball shoes or even better barefoot in the sand, I like beach volleyball, that’s the best,” she added.

Although she can’t wait to get back to her usual get up, Micek said she had a great time being a PBA muse.

“It was super fun, there was a lot of energy in the gym and there’s the dance routine it was really cool to be a part of (this),” she said.