CHRIS Ross and Chico Lanete were summoned by the PBA Commissioner’s Office to explain their sides in the late-game controversy that marred San Miguel's Philippine Cup encounter against Barangay Ginebra on Sunday night.

Technical director Eric Castro is set to sit down with the two players as the league tries to get to the bottom of a confusion over free throws in the final 4.5 seconds of the hotly-contested match which the Kings won, 100-96, at the Smart Araneta Coliseum.

This developed as the league also mulled over reprimanding referees Noy Guevarra, Jimmy Mariano, and Gerry Borja for failing to assert their authority and allowing the wrong player - in this case Ross - to shoot a free throw with the outcome of the game in the balance.

In particular, Guevarra was seen on video as the one who handed the ball to Ross, who went on and attempted the free throw even if it was clear that Lanete was the one fouled by Sol Mercado while attempting to put back a missed three-pointer by Arwind Santos. 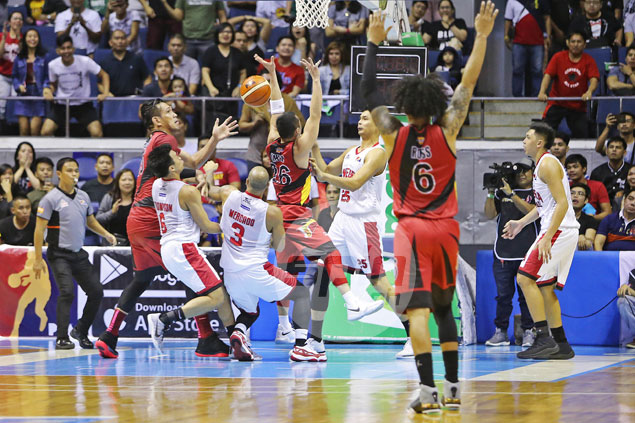 The San Miguel guard, who was 5-of-5 from the foul line at that point, missed his first free throw before officials realized the error. San Miguel trailed, 98-95, at that point.

The league later explained that Ross was whistled for an ‘unsportsmanlike technical foul’ for attempting a free throw as a ‘role player’ and not the ‘designated player,’ which in this case, was Lanete.

Castro admitted during the post-game interview at the press room of the Smart Araneta Coliseum that the referees may have erred during that sequence, but at the same time, didn’t spare Ross and Lanete of any wrongdoing.