When you're riding bus with Game 4 on TV and Ginebra fan behind wheel, better hold on to your seat

AFTER calling it a day at the office last Friday, I boarded a southbound bus along EDSA.

Like hundreds of buses that ply Metro Manila’s thoroughfares, my ride was the air-conditioned variety and fitted with a flatscreen TV and a cable box located above, just to the right of the driver’s head.

The driver and the conductor had an ongoing discussion about the PBA Finals match between the Meralco Bolts and Barangay Ginebra happening that night. When I left the news desk, Meralco had just staged a major rally to overcome an 11-point deficit and take control by the end of the third quarter.

“Lumamang na, pinahabol pa! Magre-resign ako pag natalo Ginebra!” said the guy behind the wheel as he went pedal-to-the-metal from the stretch of Guadalupe to Gil Puyat Avenue. With pride at stake, I overheard the crew discussing several bets they made with their co-workers.

Pausing to take passengers at the corner of Estrella Street, the duo looked expectantly at the empty TV screen that to their delight (and my horror) suddenly flashed a teleserye. The conductor quickly stopped collecting fares to go forward where he grabbed a remote to quickly change channels to TV5. The Gin Kings had by then just regained the lead, 83-78 in the last quarter with around four minutes left.

Normally, I don’t mind onboard videos because they help pass the time for the commuting public (especially during rush hour traffic). But when your driver thinks he’s the local version of 'The Fast and the Furious' as we sped toward Ayala Avenue, I feared that he might be tempted to watch what appeared to be a thrilling battle involving his favorite team.

By now the bus has begun filling up. I turned to see if my seatmates shared my concerns: the guy on my left was fixated on the game while the lady seated on my right was focused on her smartphone where a YouTube video from Korea showed clips of people riding a rollercoaster. Both were unaware that a more thrilling ride was going on in the actual world.

My eyes darted from the driver to the screen. I was hoping the game would end before we left the Ayala terminal but the driver seemed to be in a hurry for reasons that are obvious. At the corner of Ayala, he boxed in several other buses to get more riders. When we came upon the bulk of the passengers under the MRT Station, a “SIGNAL NOT FOUND” dominated the screen. 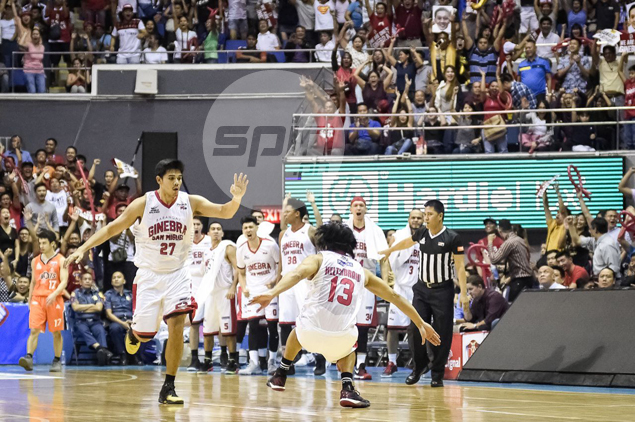 From Pasay Road to SLEX, 'Never Say Die' turned to 'No Slowing Down.' Soon as we left the Skyway tollgate, the game reappeared and the score was 86-83 in favor of Ginebra. There was a collective cheer inside the SRO bus but the signal was intermittent, and we soon lost it. By the time we regained it in Bicutan, the game was tied 86-all. There were muffled groans. We were definitely above the 80 kph speed limit, thankfully, sticking to one lane. The driver had taken off his bonnet at this point.

The outcome was decided as the bus reached Alabang. We were at the bus stop when forward Joe Devance sank his go-ahead for Ginebra with 25.7 seconds left. Cheers erupted from both remaining and departing passengers.

It was the longest 'last two minutes' of a game in my life.

When the bus finally resumed its trip with the game finished and probably excited to collect his winnings, the driver took the remote and switched from video mode to music files. He selected one by singer Roel Cortez, “Kay Sarap Mabuhay.”

After getting off the bus in one piece, I had to agree.