SAN MIGUEL Beer star center June Mar Fajardo’s overpowering elimination-round performance has vaulted him to the early lead in the race for the PBA Philippine Cup Best Player of the Conference award.

The reigning MVP logged 41.2 statistical points (SPs) behind his league-best 18.5-point average to go with 12.7 rebounds, a tournament-leading 2.3 blocks as well as 1.5 assists in 11 games in the single-round eliminations.

Not too far behind is Alaska’s energetic forward Calvin Abueva, who has 38.5 SPs thanks to his nightly double-double average of 17.4 points and 13.0 rebounds, along with 3.3 assists.

Last season’s Rookie of the Year Greg Slaughter of Barangay Ginebra is at No. 3 spot with 35.0 SPs, followed by one-time league MVP Arwind Santos of San Miguel with 33 SPs.

Meralco’s hard-banging Fil-Am forward Clifford Hodge is at fifth spot in the BPC race with 32.3 SPs.

San Miguel ended up as the top seed in the playoffs after going 9-2 (win-loss) in the eliminations, where new coach Leo Austria took full advantage of Fajardo's size and vastly improved play around the basket.

“Logical lang naman na sa kanya (Fajardo) kami pupunta (in terms of plays) because he can really dominate with his size in the shaded lane,” Austria said.

“He’s deserving to be the go-to-guy of the team and I believe he can dominate the league for the next few years pa, except siguro kung may mga import na mas malalaki sa kanya,” he added.

Meantime, GlobalPort’s freshman guard Stanley Pringle holds a big lead in the race for this season’s Rookie of the Year plum with his 28.8 SPs.

The six-foot guard out of Penn State, this year’s top rookie pick, averaged 14.0 points, 6.6 rebounds and 4.7 assists in a campaign that ended with the Batang Pier's loss to Ginebra in the first round of the playoffs.

Talk ‘N Text’s reed-thin wingman Matt Ganuelas-Rosser is in second with 23.4 SPs, while Rain or Shine’s Jericho Cruz is in third spot with 19.8. 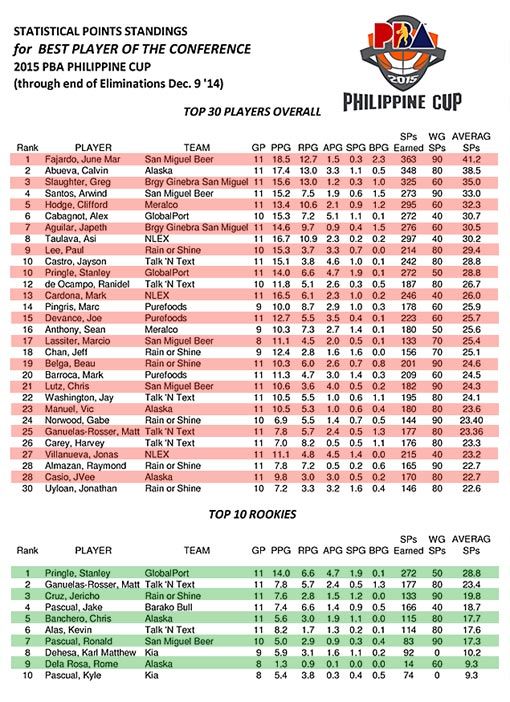