BEST friends Allan Caidic and Tino Pinat led the well-wishers when basketball great Avelino 'Samboy' Lim's 56th birthday was celebrated with a simple gathering organized by his wife and daughter.

Lim, who suffered a heart attack while playing in a legends game in Pasig in November of 2014, sat on a chair and smiled as family and friends poured in to extend their greetings in the gathering organized by his wife Lelen and daughter Jamie.

"Masaya, even Samboy responded by smiling sa mga well-wishers n'ya pag nilalapitan mo at kinakausap," said Caidic, one of Lim's closest friends and a longtime teammate, both at San Miguel Beer in the PBA and in the national team.

Also there to wish Samboy were Norman Black, his coach in the multi-titled SMB teams of the eighties and nineties, and Robert Jaworski, who coached Lim in the first national squad of PBA players to take part in the Asian Games back in 1990. 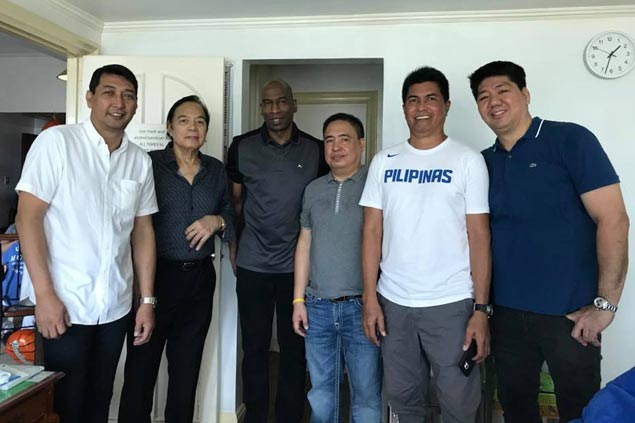 Caidic and Black (an assistant coach together with Rino Salazar) were also part of that Philippine team that finished with a silver medal, losing to host China in the gold-medal game.

"It was a good day," said Black, who admitted he turned emotional when Samboy's family said the former PBA high-flyer recognized Black's voice when he spoke. "It was so nice to see Samb again."

Other well-wishers were Alvin Teng, Lim's another former teammate at San Miguel, Jojo Lastimosa, who briefly played with Samboy in the Lhuillier team in the defunct PABL, and Pinat, who was one of Lim's teammates at Letran.

Lim's birthday was actually April 1 but was celebrated a week late since it fell on Easter Sunday.

Caidic said the gathering started with a mass.

"Everyone there is hoping and praying na mag-improve pa ang situation n'ya," said Caidic, who was also with Lim's family when they celebrated his birthday on April 1.