Long wait over as Rain or Shine reaches finals

RAIN or Shine clinched a first-ever PBA Finals appearance in franchise history after holding off B-Meg, 92-82, on the final day of the Governors Cup semifinals at the Smart Araneta Coliseum on Wednesday night.

Derailed three times in their march to the championship round, the Elasto Painters wouldn’t be denied this time as they built a lead huge enough to cushion a late Llamados comeback.

They finished their semis stint with a 10-4 record and are now four wins away from winning their first championship since entering the league in 2006. The Finals stint also assured the franchise of its best finish since placing fourth in the last Philippine Cup.

“Kaya naman pala,” said Rain or Shine coach Yeng Guiao, who will be appearing in his finals Finals since the 2006 Philippine Cup and his 10th overall. The fiery mentor is gunning for his sixth championship. 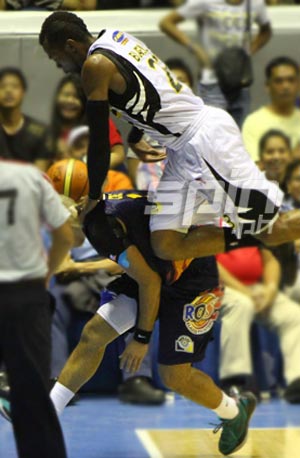 The all-important win came as a fitting birthday gift for Rain or Shine’s Terry Que, who co-owns the franchise with Raymund Yu.

Jeff Chan led the squad with 25 points, including a three-pointer with eight minutes and 10 seconds remaining that gave the Elasto Painters an 83-67 lead.

Jervy Cruz, who failed to suit up for the team the last time, played a pivotal role in the Elasto Painters’ third-quarter push that saw the team establish a 74-51 lead late in the quarter.

However, the former University of Santo Tomas stalwart, who finished with nine points on 4-of-4 shooting in 16 minutes, committed a flagrant foul on B-Meg’s Jerwin Gaco early in the fourth, forcing the Rain or Shine coaching staff to sit him out for the next three minutes.

The Llamados came closest at 88-82 after Marcus Blakely banked in a runner with 55.2 seconds remaining, before the Elasto Painters held on thanks to free throws from Cornley, rookie Paul Lee and Beau Belga.

“I felt we weren’t safe kahit twenty-three na lamang,” Guiao admitted. “We played good defense, we pressured the ball, we hounded James Yap, but sometimes that’s not enough, you have to catch them on their bad night—and we did.”

Blakely scored 18 points and grabbed 11 boards to lead the Llamados, who finished the semis with a 9-5 card. The Llamados now face the winner of the Ginebra-Talk ‘N Text do-or-die encounter in a playoff for the second Finals berth on Friday.

James Yap finished with 12 points, but needed 18 shots to get to his total.