Amazing Orlando Johnson numbers bring back memories of Mitchell Wiggins' time with Ginebra. Find out why

BARANGAY Ginebra import Orlando Johnson’s fiery performances in his first three games made me sift through the PBA’s records as well as my own going to as far back as the early 1990s.

For the simple reason that the former Indiana Pacer and Sacramento King debuted with 50 points in 108-99 loss to Alaska last Friday, followed it up with 46 in a 95-91 loss to Talk ‘N Text two days later then tallied 47 when Ginebra notched its first win in the conference, 105-98, against Manny Pacquiao and his Kia Carnival last Wednesday.

Prior to Johnson, the last time a player to score at least 50 points in his very first PBA game was Darius Rice, who had 56 for Purefoods in a 127-126 double overtime win over the Magnolia Beverage Masters on April 2, 2008.

But just when you think that 50 by Johnson could’ve been a fluke since it was only his first game and opposing coaches haven’t scouted him yet, Johnson, who was officially measured by the league to be just 6-4 (lying down and with no shoes on), comes up with 46 and 47 against the newly-crowned Commissioner’s Cup champion Tropang Texters and the Carnival, respectively.

That’s 50, 46 and 47 points in a six-day span, in his first three games in a very physical league like the PBA and on a sizzling 58.5 percent shooting from the field.

Prior to Johnson, the last player to score at least 46 points in his first three games in the PBA was Mobiline’s Jerod Ward in the 2001 Commissioner’s Cup when he opened with 61-, 52- and 48-point games.

Incidentally, Mitchell Wiggins, who spent his best years in the NBA with the Houston Rockets, is the father of this season’s NBA Rookie of the Year, Andrew Wiggins, of the Minnesota Timberwolves.

That prompted an Earl Cruz (@EarlThePearl921) post on Twitter: “@thepbaologist... Andrew Wiggins has the Ginebra blood running through his veins. :)”

Who was the last player in the PBA to average at least 47.7 points in at least three straight games while shooting 58.5 percent from the field, prior to Johnson?

Ironically, it was another former Ginebra import I was able to unearth in the person of Danny Jones who averaged 48.1 points with a 66% FG clip in 12 games for the Gin Kings in the 1992 Third Conference.

The Kings, of course, have not won a championship since the 2008 Fiesta Conference with Chris Alexander as import.

No wonder Barangay Ginebra fans are hoping Johnson will turn out be the messiah which will lead Gienbra to the Promised Land and end what is already a long seven-year title drought. 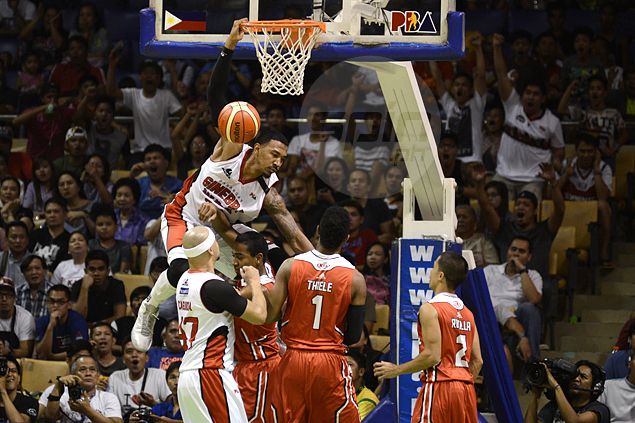