DAVAO CITY - If this were a boxing match, Manny Pacquiao was down for the count three-fourths into the fight. But this is basketball, so who the heck cares if Manny Pacquiao loses, right?

The boxer, congressman, TV host, and soon-to-be basketball coach and pro player went down badly with his team MP Hotel on Tuesday night to The Royal Mandaya Hotel-CMO, 81-64, in the 2014 Kadayawan Invitational Basketball Tournament

Incidentally, Pacquiao played for his MP Hotel team on the same day the fighting congressman was excused from attending the PBA Draft Combine at the Gatorade Hoops Center in Mandaluyong, supposedly to attend to matters in his district in Sarangani.

All rookie hopefuls are mandated to attend the pre-draft camp unless he has a 'valid excuse.'

But the crowd inside the Davao City Recreation Center was oblivious to that fact as it went wild the moment Pacquiao took to the floor wearing the MP Hotel’s all-black kit with No. 17 on his back.

The ovation rose to a crescendo when the Kia playing coach in the next PBA season hit a three-pointer from the left wing to open the scoring for his team, a little over a minute into the game.

Two other jumpers from mid range for Pacquiao over the outstretched arms of American import Mike Harry, convinced Leuterio and the basketball-crazy Dabawenyos that the 'Pacman' can really play.

And he has to be stopped.

Leuterio sued for time midway through the first quarter and ordered Pacquiao shackled. By then, the opponents had taken a 28-17 lead after the first period and Pacquiao already had seven of his team’s output.

The game took a turn for the worse for MP Hotel when Pacquiao was shadowed by Darwin Cordero, who ironically was cut by Pacquiao’s Kia squad during tryouts.

The Sarangani congressman threw up a pair of airballs and had the ball stolen once off the dribble. He had a nice cut under the basket in a backdoor play but missed the short stab.

He was taken out after playing 18 minutes through two quarters with his team down, 42-33, at the turn.

It was all downhill from there for Pacquiao's team. 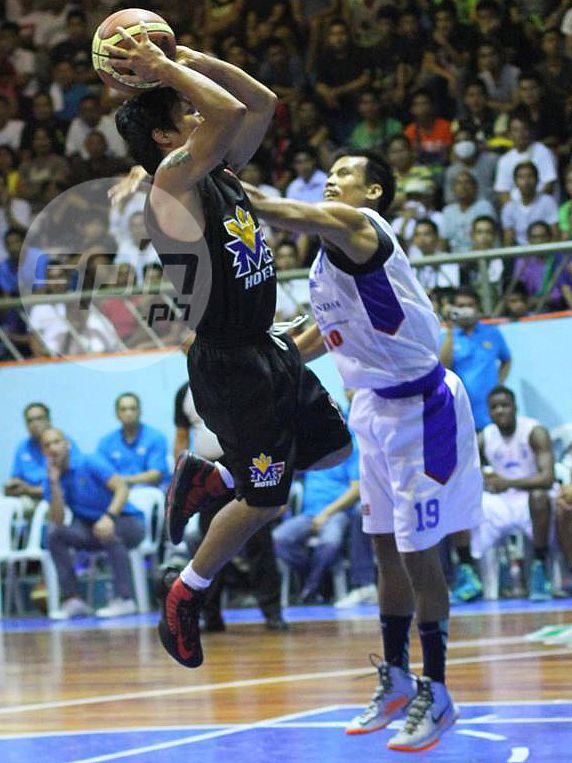 In the third quarter, MP Hotel import Victor Wade picked up his fourth foul and had to sit down with 7:03 left and THRMH-CMO on top 66-55.

With Wade out of the lane, Harry imposed his will inside to give TRMH-CMO a 58-49 lead. In the fourth, a double technical slapped on Jay Collado and a foul on Celestino Cruz gave TRMH-CMO six freebies and possession.

The Hoteliers went 5 of 6 in that trip to the line by Cruz and Mark Yee and the lead ballooned to 72-57.

People in the jampacked gallery started leaving after that.

“Nagulat ako na tumitira si Manny. Overall I am happy to see him play but more than that I am happy we won and get back into contention. I like the way my boys played tonight with that level of intensity,” said Leuterio.

TRMH-CMO, led by Eman Calo with 18, is now 1-1 after a shocking loss to Montaña Pawnshop in their first outing. Harry added 15 and Cordero 13 for the Hoteliers.

The 35-year-old boxing icon, however, seemed more concerned with preparing for his PBA debut than MP Hotel's standings in the tournament.

In the first game, Goldstar Hardware defeated Montaña Pawnshop to all but clinch a place in the finals with two wins in as many starts.