Kobe Caluya says he can help rekindle interest in PBA: 'You haven't seen a player like me'

CHARLEY 'Kobe' Caluya said he still cherished the unique experience of applying for the PBA Draft and taking part in the Rookie Draft Combine despite being prohibited from participating in the mini tournament on Thursday.

After taking part in the skills tests on Wednesday, the oldest rookie hopeful at 43 was relegated to a spectator on Day Two as he witnessed his Team E teammates win the tournament after a 55-51 overtime win over Team C in the final game.

His team, led by MVP Jio Jalalon, was the only one among the eight squads without a sub after Caluya was disallowed to participate, yet they still proved good enough to take home the championship and the P50,000 prize.

Still, Caluya expressed some disappointment after he was deprived to showcase his wares.

The PBA gave out conflicting signals on why Caluya was barred from taking part in the mini-tournament.

The league explained on Twitter that officials were concerned about Caluya’s “health and well-being for he grew pale and was exhausted after undergoing strength and agility tests” in Day One.

On the other hand, PBA deputy director for basketball operations Eric Castro, who supervised the Draft Combine, implied Caluya’s scores in the tests didn’t make the cut to be eligible to take part in the competition.

“He’s not fit to play based from the tests that were done yesterday by Focus Athletics,” Castro said. “Today, we wanted him to observe and watch the games for the meantime.” 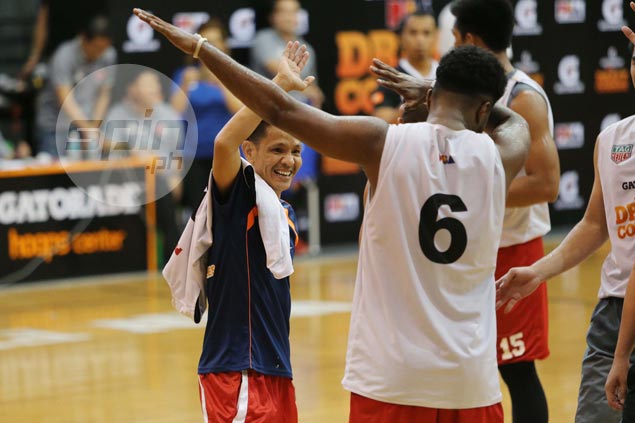 Still, Caluya, who spoke more eloquently than some PBA coaches, underlined that the true capability of a player is measured on the court – and not by mere skills tests.

Caluya, though, can still be part of draft on Sunday at Robinsons Place Manila - if he is not stricken off when the league screens the applicants. The final list is set to be released on Friday.

The 5-7 Caluya said he will attend the draft if he passes the screening, adding it is unfair to him to be stricken off the list.

Caluya ended the interview by making a final pitch to the scouts.

But it’s not only theatrics that he can offer. Caluya insisted he has some skills.