However, he’s not ready to assume the role of Gilas leader.

Deferring to his , Abueva believes veterans Jayson Castro and June Mar Fajardo deserve to lead the way for this new batch of Gilas players tasked with guiding the country back to the Fiba World Cup in 2019.

“Andiyan si June Mar, si Jayson. Mas beterano sa akin ang mga 'yun,” he said of the duo, who along with Japeth Aguilar are the only remnants of the Gilas team that won the silver medal in the 2013 Fiba Asia Championship in Manila under coach Chot Reyes.

The team began its regular weekly practice on Monday night at the Meralco gym, with only Terrence Romeo, Raymund Almazan, Arnold Van Opstal, and the injured Art dela Cruz not around.

Abueva said the 24-man training pool has yet to choose its team captain, but he was vocal about who will get his endorsement. 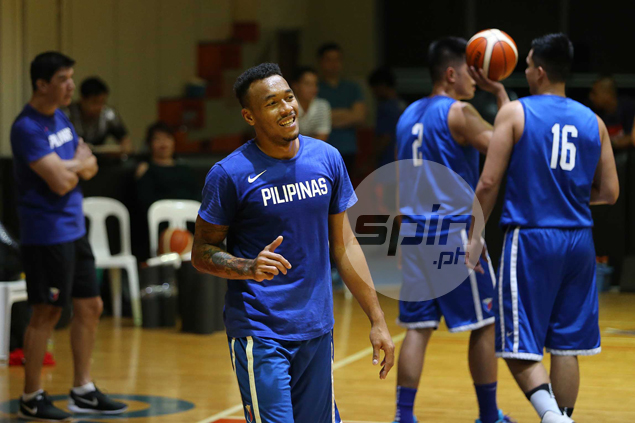 The energetic forward out of San Sebastian refused to be labeled as the likely leader of the Gilas pool composed of 12 cadet players and 12 veterans.

Abueva first suited up for Gilas in 2015 as part of former coach Tab Baldwin’s final 12-man roster to the Fiba Asia Championship in China, where the national team duplicated the runner-up finish its predecessor achieved two years before.

However, he was one of the final two cuts, along with LA Tenorio, when Gilas competed for a berth in the Rio de Janeiro Games during the Fiba Olympic Qualifying Tournament here - a decision by Baldwin that drew a lot of flak.

Abueva refused to look back at the past, and said just like before nothing else is cast in stone even with a new coaching staff now at the helm.

Same as everybody else in the training pool, Abueva said he has to compete for his spot in Gilas’ 12-man roster.

And that meant sacrifices for him and the rest of the training pool members, attending the weekly Gilas training, apart from having to mind their practices with their respective mother ballclubs.

But then, nothing beats the feeling of having to play and represent flag and country.