THE head of the Senate Committee on Games and Amusement said on Tuesday he has no plan to conduct an inquiry into Greg Slaughter and Marcio Lassiter's pullout from the Gilas Pilipinas pool, saying playing for the national team is a "privilege and not an obligation."

Senator Sonny Angara told Spin.ph he has no plan whatsover to meddle in the affairs of the national team, a day after his counterpart in Congress, Cavite Rep. Elpidio Barzaga, bared plans to launch an inquiry into what he described as an "unpatriotic act" by the two PBA players.

"We have no plans of calling them (Lassiter and Slaughter) nor do we intend to conduct an investigation," said Angara, a first-term senator from Aurora province.

His opinion runs counter with that of Barzaga, head of the House Committee on Games and Amusement who, in a tirade on Monday, hit out at Slaughter and Lassiter for pulling out of the Gilas pool for the Fiba World Cup in Spain and the Asian Games in Incheon, South Korea.

The fiery congressman also labelled as "palusot" the statements of both players that they don't want to take away spots in the World Cup team from the original 12 players who earned the trip to Spain by finishing second to Iran in the last Fiba-Asia championships in Manila.

At the same time, Barzaga bared plans to summon the two as well as officials of the Games and Amusement Board (GAB) as he threatened to push for the cancellation of the professional licenses as well as the passports of the two Fil-foreign players from Ginebra and San Miguel Beer.

However, Angara, a second-generation senator, was firm in his stand that players who decline to play for the national team cannot be forced to do so.

"It's a privilege (to play for the national team). Not all who are asked will accept, pero di din mapilipit," he said.

Meanwhile, a source close to Lassiter and Slaughter bared the two under-fire players are feeling the pressure but at the same time are comforted by the support and understanding of fans.

Spin.ph has also received mixed reactions to the controversy, but majority of the tweets have condemned the threat to cancel the licenses and passports of the two players.

Here are some of the tweets: 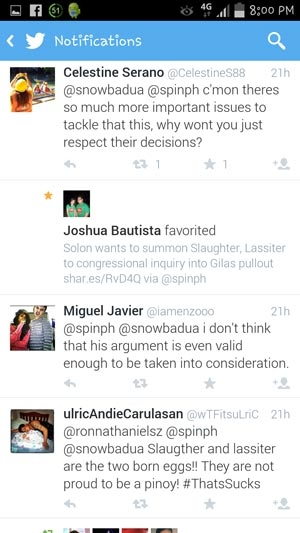