REDEN Celda was a member of the National University team that made history three years ago when it captured its first UAAP men’s basketball title in 60 years.

But he never really managed to shine in his stint with the Bulldogs as the spotlight fell mostly on celebrated teammates Troy Rosario, Gelo Alolino, and Glenn Khobuntin.

On Sunday night, the rookie guard finally got the chance to introduce himself to a huge crowd at the Mall of Asia Arena.

Playing his best game as a pro, Celda delivered in the clutch as he steered Mahindra to a 122-121 overtime win over Phoenix in the PBA Commissioner’s Cup.

With the Floodbuster trailing in the waning seconds of the extra period, the Davao native took matters into his own hands and buried a one-handed floater off import Jameel McKay to barely beat the shot clock.

Celda ended up with a career-high 25 points – including 13 in the third period – on 11-of-17 shooting as he helped Mahindra stay statistically alive in the race for a berth in the quarterfinals.

It was a glorious moment for the 25-year-old Celda, who unknown to many, almost quit the game shortly after the Bulldogs won the championship in 2014 as the frustration of not being able to play almost overcame him. 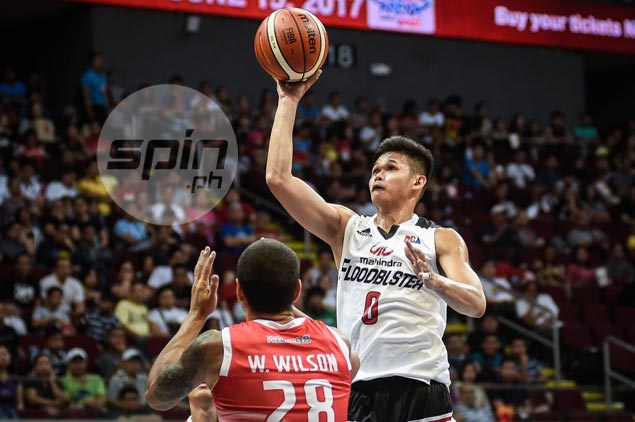 But he credited his partner and family for pushing him to persevere.

Eventually, he was drafted eight overall by NLEX in last year’s rookie draft, although he never got to play for the Road Warriors as he was traded to the Floodbuster in the deal that involved Gilas player Bradwyn Guinto.

Unlike in college, Celda was more patient waiting for his chance this time.

Finally given the moment, Celda seized the opportunity.